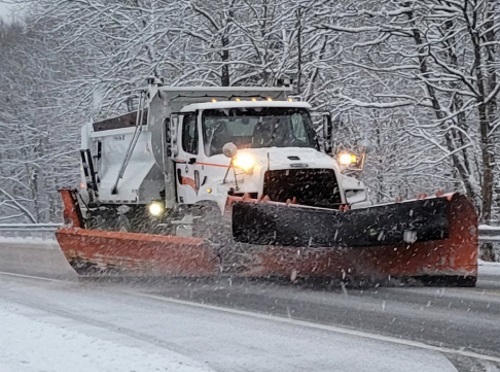 The agency said it received nearly 1,700 entries from Connecticut residents, with Connecticut DOT staff whittling those entries down to a final list of 20 names. Out of those 20 names came the winning four, selected by a public vote.

“The Name the Snowplow contest was a new way for the DOT to connect and engage with residents across the state. I appreciate the creativity, enthusiasm, and fun residents had with our first-ever snowplow naming contest,” said Connecticut DOT Commissioner Joseph Giulietti in a statement.

“These newly named snowplows will be traveling throughout the state,” he added. “As always, keep yourselves and our drivers safe – don’t crowd the plow.”

The agency said its highway operations team consists of 1,600 people, including more than 700 who drive snowplows in the winter. There are more than 600 state plow trucks including 24-tandem axle “Tow Plows,” four of which will be tagged with one of the four winning monikers.

State departments of transportation across the country are increasingly using snowplow-naming contests as part of their public outreach efforts.

Such outreach is becoming more critical as state DOTs and public works agencies in charge of snow removal operations experienced a shortage of snowplow operators during the 2021-2022 winter season.

For example, a survey conducted by the American Association of State Highway and Transportation Officials January and February found that 84 percent of respondents indicated they are experiencing higher than normal vacancies of snowplow operators this winter season.

“The primary goal is to ensure the safety of the traveling public, but more importantly, we need to give police, fire, and EMS crews the ability to reach people during emergencies,” he noted.

“Unfortunately, this season, our survey shows that the shortage of snowplow drivers is making this critical work far more difficult,” Tymon added.