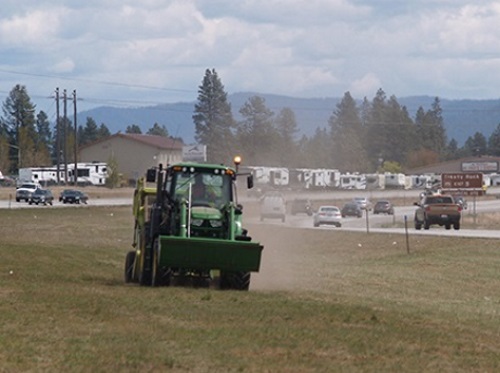 The Idaho Transportation Department is deploying a new machine (seen above) this spring to pick up trash along Interstate 90 from Washington to Coeur d’Alene.

The new contraption requires two operators – one to drive the machine, which uses metal teeth to comb through the grass, and another to haul the trash away in a dump truck.

“To do [clear trash] one mile by hand takes five operators working together for eight hours,” explained Jerry Wilson, an operations engineer with the agency, in a statement. “With this machine, we can cut that down to two people working five hours and still cover the same distance.”

The machine works particularly well in the “flat areas” of highway medians, Wilson noted, which Adopt-A-Highway volunteers are typically encouraged to avoid for their own safety.

“We will continue to rely on volunteers through the Adopt-A-Highway program to help get this mess cleaned up,” Wilson said. “They are just as valuable to us as this new machine, and we are inspired by the effort they make every year to keep Idaho beautiful.”

In 2021, the Idaho Transportation Department said volunteers in North Idaho picked up 4,171 bags of litter or about 72.8 tons of trash – enough to fill 18 garbage trucks.

The Arizona Department of Transportation also reported a major uptick in trash collection in 2021 versus 2020.

Meanwhile, state departments of transportation across the country are gearing up for spring litter removal efforts.

Keep Oklahoma Beautiful noted in a statement that it collaborated with 138 Great American Cleanup community events in 2021, up from 49 previously, collecting nearly 3 million pounds of litter from nearly 6,000 miles of roads, more than a 1,700 percent increase from 2020.