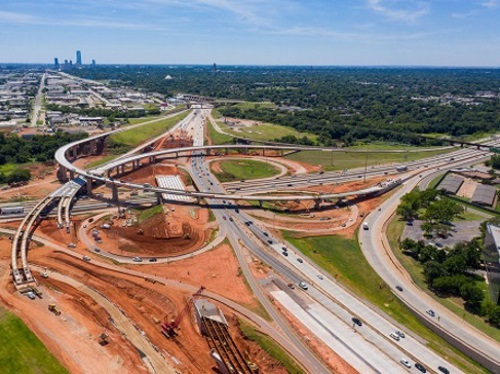 Safety and traffic efficiency are poised for major improvements following the completion of the I-235/I-44 interchange in Oklahoma – a $105 million, three-year-long reconstruction project that includes 11 new bridges, all part of a more than a decade-long effort to improve I-235, which serves Oklahoma City.

[Above photo by the Oklahoma DOT]

“The opening of the I-235/I-44 interchange is the culmination of more than 30 years of community involvement, planning and construction. It’s a huge step forward in improving our urban transportation system,” said Gov. Kevin Stitt (R) in a statement.

“Thanks also goes to our legislators, who in recent years have invested in our transportation infrastructure with dedicated funding avenues, to meet not only today’s needs but also needs well into the future,” he noted.

“[We have] invested nearly $400 million in the I-235 and US-77/Broadway Extension corridor to meet traffic demand across the growing Oklahoma City metro area and to significantly improve safety,” added Tim Gatz, secretary of the Oklahoma Department of Transportation.

The opening of the I-235/I-44 interchange also winds up almost 11 years of construction to modernize I-235, he added – an effort that included infrastructure improvements to lessen significantly the chance of flooding along the corridor.

Oklahoma DOT noted that project include construction of two flyover ramps to move traffic more efficiently and safely through the interchange, making it the first four-level interchange on the state interstate system.