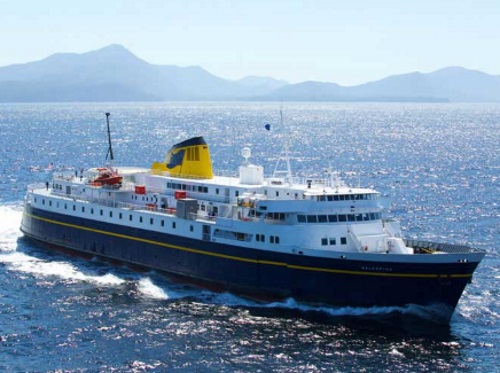 Alaska has entered negotiations to sell its ageing M/V Malaspina ferry (seen above) to Alaska-based MV Malaspina LLC (MVM), which is floating plans to use the 59-year-old ship as a training facility for the University of Alaska’s Maritime Training Center in Ketchikan or as a maritime museum chronicling the history of the Alaska Marine Highway System.

Constructed in 1963, the M/V Malaspina was the first ship to enter Alaska Marine Highway System. Named after the Malaspina Glacier – located in Wrangell-St. Elias National Park & Preserve – the Alaska Department of Transportation & Public Facilities said in a statement it is retiring the ship due to high repair costs.

Moored at Ward Cove in Ketchikan in long-term layup since December 2019, repair estimates for the M/V Malaspina initially topped $16 million, but have increased substantially since discovering significant steel damage, along with estimated midlife conversion requirements and the ship’s need for a repower, including engines, reduction gears, and propellers, the agency said.

That plan includes a more reliable and longer ferry sailing schedule as well as establishing essential ferry service for rural communities, with a potential for $1 billion in funding coming from the $1.2 trillion Infrastructure Investment and Jobs Act, signed into law in November 2021.