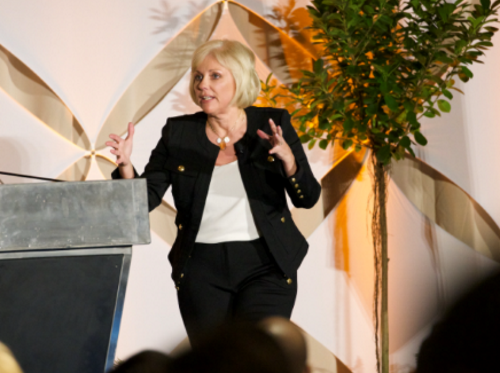 In a keynote speech closing out the National Highway Traffic Safety Administration’s 2022 Lifesavers Conference on Highway Safety Priorities in Chicago, National Transportation Safety Board Chair Jennifer Homendy (seen above) challenged local advocates and safety leaders to “fight like hell” and use the “Safe System Approach” to reduce rising deaths and injuries on U.S. roads.

[Above photo by Bryan Delaney for NTSB]

“Traveling on U.S. roads is the deadliest it’s been since 2007,” Homendy said in her remarks. “In fact, it’s deadlier than any other mode of transportation. Think about that.”

She stressed that all parties involved in roadway safety – from advocates to state agency personnel – must never lose sight of the fact that they are all on the same side.

“We want the same thing. [And] it’s up to all of us to reverse this deadly trend. To create that safe system so that no one loses their life or is seriously injured in a crash,” Homendy emphasized. “The only way we succeed is together: united, never divided.”

The Lifesavers Conference is the largest annual gathering of highway safety professionals in the United States, and its public service awards recognize individuals and organizations for achievements in the field of traffic safety. The awards also seek to emphasize the zero-roadway fatality goal outlined in the U.S. Department of Transportation’s National Roadway Safety Strategy, released in January.

Holly Kostrzewski, regional program director for Towards Zero Deaths at the Minnesota DOT, received an award for her efforts to reduce traffic fatalities and increase seat belt use in tribal communities across Minnesota.

Meanwhile, the Montana DOT received an award in recognition of its Safe on All Roads or SOAR program: What NHTSA called an “innovative traffic safety campaign” that combines community and multimodal outreach to bring critical occupant protection traffic safety messaging to tribal communities in Montana.

“This year’s honorees are doing vital work to save lives on America’s roadways, and that’s never been more important than right now with traffic deaths on the rise,” explained USDOT Secretary Pete Buttigieg in a statement. “We cannot and must not accept these tragic deaths as somehow inevitable – they are preventable, and we are grateful for these extraordinary awardees for their tireless efforts to keep people safe.”

“We applaud the outstanding efforts of the highway safety professionals who help keep us safe on our nation’s roads,” added Steven Cliff, NHTSA’s deputy administrator. “Each awardee has worked tirelessly to make a real difference in the safety of our roads in local communities, cities, states and the nation.”