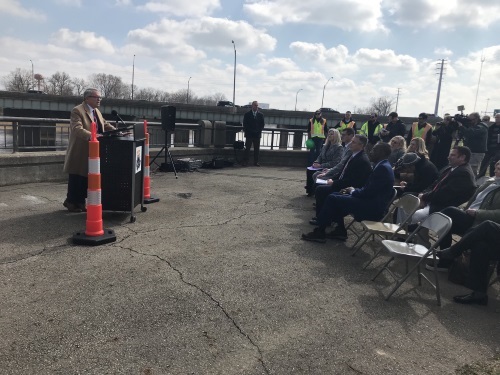 The Ohio Department of Transportation recently began construction on the next phase of its ‘Downtown Ramp Up’ project to improve Interstates 70 and 71 through downtown Columbus.

“This section of highway is one of the busiest and most vital routes for freight operators and commuters in the region, and central Ohio has long outgrown it,” said Governor Mike DeWine (R) in a statement.

“This project modernizes an outdated interchange and tackles the biggest congestion and safety problems on the road to benefit Ohioans for generations to come,” he noted.

Ohio has already invested $700 million into the overall Downtown Ramp Up mega-project, with another $250 million of committed funding for future phases that will provide two continuous lanes of I-70 and I-71 in each direction.

The redesigned entrance and exit ramps along the corridor will help motorists when changing lanes. Currently, this section of freeway averages nearly 900 crashes per year and consistently ranks among the highest crash locations in the state, Ohio DOT said.

The interstate – originally built in the late 1950s, when the population of Columbus was half of what it is today – contains several bridges that date back to the ʼ50s and ʼ60s, including the 60-year-old Front Street bridge over I-70 that this project will replace.

Jack Marchbanks, Ohio DOT’s director, added that this $280 million phase of the ‘Downtown Ramp Up’ project addresses safety and traffic congestion issues by creating new access ramps at Fulton and Mound streets, while improving access into and out of Columbus at the I-70/71 and State Route 315 interchange.