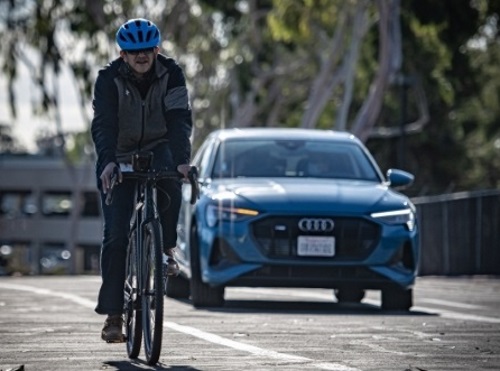 Vehicle maker Audi of America is working with Spoke, Qualcomm Technologies, and Commsignia to pilot test a cellular vehicle-to-everything or C-V2X system that beefs up protection for “vulnerable road users” or VRUs, particularly bicyclists, while enhancing overall roadway safety.

[Above photo by Audi]

This most recent C-V2X demonstration aims to validate Spoke’s first-of-its-kind hardware and software suite, designed to offer “secure, direct communication for contextual awareness and alerts” between motorists and bicycle riders, Audi said in a statement.

This particular pilot project focuses on developing hardware and software in its all-electric Audi e-tron Sportback test vehicle to use both direct vehicle-to-bicycle communication using short range signals that do not rely on a cellular network and LTE signals that use cellular towers to identify bicycles on the road.

Vehicles will be able to read their surroundings to identify when bicycles are nearby, interfacing with Spoke Safety’s connected suite – even identifying bicycles obstructed from a driver’s view.

It builds off previous pilot tests conducted in collaboration with the Virginia Department of Transportation to study a range of “intuitive communications tools” to alert drivers when they are entering work zones, as well as one in Georgia to improve safety in school zones and around school buses.

Audi said it is launching this VRU-focused pilot test at “a particularly crucial time” as the Infrastructure Investment and Jobs Act or IIJA – enacted in November 2021 – provides “significant funding opportunities” for connected vehicle technology deployments.

For example, the IIJA specifically allocates funds for a two-year research study led by the National Highway Traffic Safety Administration and the Federal Highway Administration to “expand vehicle-to-pedestrian research efforts focused on incorporating bicyclists and other vulnerable road users into the safe deployment of connected vehicle systems.”

NHTSA recently noted that 846 bicycle fatalities resulted from motor-vehicle-related accidents in 2019 – a 36 percent increase since 2010. Year-over-year, NHTSA reported on-road cycling injuries increased 4.3 percent to 49,000 in the U.S. in 2019.

In addition, the National Roadway Safety Strategy released by the U.S. Department of Transportation in January noted that “fatalities among pedestrians and bicyclists have been increasing faster than roadway fatalities overall in the past decade.”