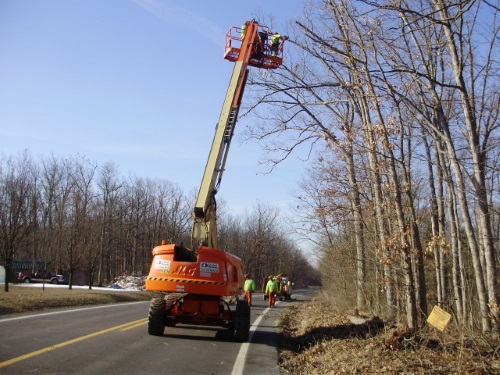 Called “canopy clearing,” that process is critical to improving roadway safety. According to the “Vegetation Control for Safety” manual published by the Federal Highway Safety Administration, trees growing close to a roadway can present a “fixed object hazard” to travelers, including motorists, bicyclists, and others.

“Canopy clearing” adds another element for improving roadway safety, the agency noted. When trees and shrubs – particularly evergreens – in the right-of-way cast shadows on the pavement, freeze-thaw cycles may create isolated ice patches on the pavement – easily causing loss-of-control crashes.

Thus “canopy clearing” or “daylighting” by cutting taller vegetation lets the sun help with thawing and ice control, while also generally helping preserve pavements by preventing the buildup of moisture on roadways during warmer months.

In the past, the West Virginia Division of Highways noted in a statement it could only remove 140 acres of canopy a year, or 14 acres for each of the state’s 10 highway districts. However, the state lifted that restriction in 2022, allowing districts to cut more trees in between winter snows.

The agency added that, by law, its crews can only clear canopy between November 15 and March 31; a restriction deigned to protect endangered bat populations, which do not typically use trees during that time span.

State departments of transportation are also working to expand their knowledge base regarding the impact of trees and shrubbery on roadway safety and pavement longevity.

For example, a 95-page research paper compiled for the Ohio Department of Transportation five years ago by Ohio University suggested designs for a “decision making tool or process” to assist the agency with tree canopy maintenance practices, assessing the impact of trees and tree species on pavement degradation, road condition, and road safety in climatic conditions typical of Ohio.