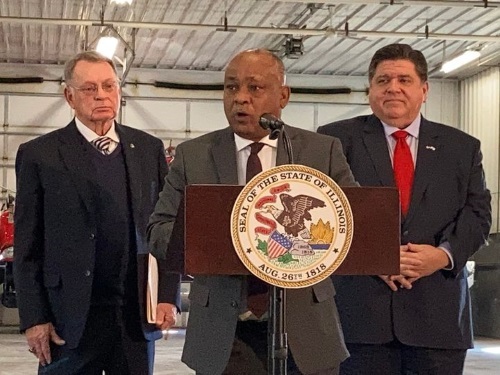 That funding comes from the Rebuild Illinois capital program, signed into law by Governor Jay “J.B.” Pritzker (D) (seen above at right) in June 2019. Rebuild Illinois is investing $1.5 billion spread out in six installments to advance local projects in 2,856 counties, municipalities and townships.

Those projects include road and bridge improvements, traffic signal upgrades, new storm sewers and bike paths, sidewalk replacements and other long-term maintenance needs, with financial oversight from the Illinois DOT.

Overall, the Rebuild Illinois program is investing $33.2 billion into the state’s transportation system, the governor said – touching all modes of transportation, from roads and bridges to transit, waterways, freight and passenger rail, aviation, bicycle, and pedestrian accommodations.

“Rebuild Illinois has repaired or replaced over 3,500 miles of roads and nearly 350 bridges statewide,” Gov. Pritzker noted in a statement. “[This] $250 million in support for municipal and county projects … [is] spurring more economic development across the state.”

“If you are making a delivery, commuting or traveling in Illinois, you are relying on a local road to get you where you need to go,” added Illinois DOT Secretary Omer Osman. “There is no such thing as a federal, state, or local road in Illinois – they are all part of one multimodal system.”

He said funding from the previous four $250 million installments to improve local transportation already have supported an estimated 2,290 projects statewide.