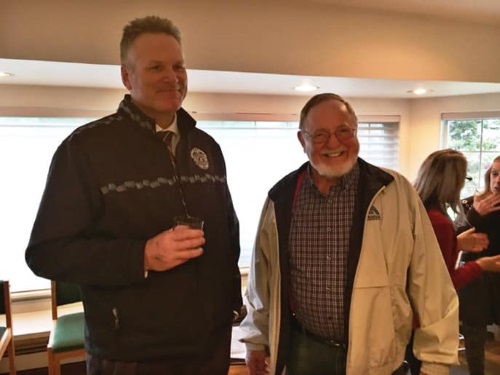 Rep. Donald Edwin Young, R-Alaska (seen above at right with Alaska Governor Mike Dunleavy) – a leading transportation and infrastructure advocate and the longest-serving Republican member of the U.S. House of Representatives – died on March 18 while traveling home to Alaska.

[Above photo by the Alaska Governor’s Office]

A long-time senior member of the House Transportation and Infrastructure Committee – which he chaired from 2001 to 2007 and on which he remained until his death – Rep. Young guided passage of the “Safe, Accountable, Flexible, Efficient Transportation Equity Act: A Legacy for Users” or SAFETEA-LU reauthorization measure, signed into law by President George W. Bush in August 2005.

He also served as the top Republican on the House Natural Resources Committee, which he had chaired from 1995 to 2001.

Rep. Young was one of only 13 House Republicans to vote for the Infrastructure Investment and Jobs Act, enacted in November 2021, followed by a vote in support of the $1.5-trillion omnibus spending package, signed into law in mid-March.

“Don Young’s … tremendous breadth of experience was a great asset to all of his fellow committee members and the entire House of Representatives,” Rep. Graves said in a statement.

“There was no greater supporter of infrastructure among Congressional Republicans, and over the years, he led the way in passing many pieces of legislation to strengthen America’s infrastructure,” he added. “I was fortunate to have the opportunity to work with him on four highway bills, including his long-term surface transportation bill, SAFETEA-LU.”

He will lie in state in National Statuary Hall in the U.S. Capitol on March 29, followed by a public memorial service at St. Francis Episcopal Church in Great Falls, VA, on March 30.