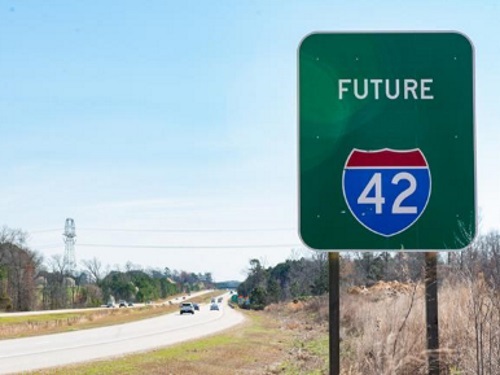 That I-42 designation marks North Carolina’s second new interstate in eastern North Carolina, after the department received permission last year from the Federal Highway Administration to designate 37 miles of U.S. 264 in Wilson, Greene and Pitt counties as Interstate 587.

“This new Interstate shows our long-term commitment to having a high mobility corridor connecting our military bases, the Morehead City port, and the communities along the corridor with the national Interstate System,” explained NCDOT Secretary Eric Boyette in a statement.

“This commitment will continue to support the economic vitality of the corridor and maintain the high level of mobility,” he said.

The new I-42 designation applies to certain stretches of U.S. 70, which are fully access-controlled highways with bridges, ramps, and loops and wide, paved shoulders:

Those two segments now meet interstate standards, NCDOT added, noting it would be upgrading the rest of that same corridor so can also be designated as I-42 in the future.

The agency added that its engineers still have to work out the logistics of the change – including drawing up the plans for a contractor to install the interstate signage and mile markers – and plans to announce a timeline for that work later this year.