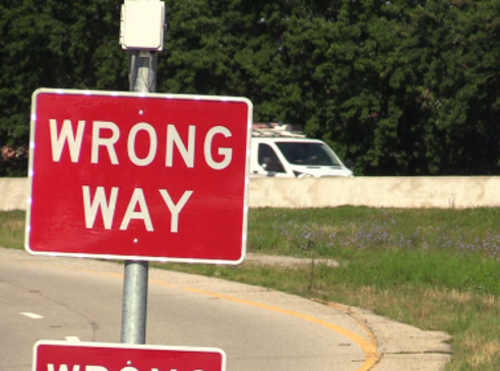 The Ohio Department of Transportation plans to install a wrong-way driver detection system in northeast Ohio in 2023. Installed along a 22-mile-long stretch of both I-71 and I-90, the $1.8 million project includes “wrong-way” signs that flash when activated and 50 detection devices at 25 locations.

When a detector senses a vehicle traveling in the wrong direction on the ramp, it immediately triggers a pair of “WRONG WAY” signs with lighted borders that flash rapidly to alert drivers of their mistake.

A second detector looks further down the ramp to determine if the vehicle has continued down the ramp, which triggers a second set of “DO NOT ENTER” and “WRONG WAY” signs, also with lighted borders, to flash rapidly.

Simultaneously, the system alerts the Ohio DOT’s Traffic Management Center in Columbus – providing a short video clip to confirm the presence of a wrong-way driver. Once confirmed, the agency notifies local law enforcement.

While wrong way crashes made up only 0.01 percent of all crashes in Ohio in 2021, they are 40 times more likely to be deadly, the agency added.

According to analysis by the AAA Foundation for Traffic Safety issued in March 2021, some 2,008 deaths occurred due to wrong-way driving crashes on divided highways between 2015 and 2018 for an average of approximately 500 deaths a year; up 34 percent from the 375 deaths annually from 2010 to 2014.

The Ohio DOT said it selected this section of I-71/I-90 based on a statewide analysis of wrong-way crashes that occurred between 2016 and 2019.

That evaluation also considered the number of alcohol-related crashes that had occurred within a quarter mile of potential wrong-way entry points, the number of bars and restaurants serving alcohol near the exit ramps, and the amount of traffic using the ramps.

“Improving safety for people who live, work, and travel in our state is a top priority,” noted Jack Marchbanks, Ohio DOT director, in a statement.

“This technology is already helping reduce the number of drivers traveling the wrong way on I-71 in Hamilton County since its installation more than two years ago,” he said.

“This project is an important step forward in reducing wrong-way crashes by adding an extra layer to alert drivers they’re driving in the wrong direction,” added John Picuri, Ohio DOT’s District 12 deputy director. “Once constructed, we will evaluate the effectiveness of this system and determine if other corridors in northeast Ohio could benefit from a similar system in the future.”

State departments of transportation across the country continue seeking ways to reduce wrong-way driving crashes as part of their ongoing safety focus.

For example, in August 2021, the Tennessee Department of Transportation – in conjunction with the University of Memphis – published a 62-page analysis on the various technologies available to help prevent wrong way driving.

In January 2019, the Nevada Department of Transportation installed and activated a wrong-way driver detection and alert system on U.S. 395 based on radar and closed-circuit cameras that automatically detects vehicles entering a highway in the wrong direction, activating two sets of red flashing wrong-way signs on the ramp.

The Arizona Department of Transportation deployed a first-in-the-nation thermal-camera wrong-way vehicle alert system in the Phoenix area in 2017; a system that received a national award in 2018. The agency is also enhancing and expanding its wrong-way driver detection system to other highway corridors statewide.