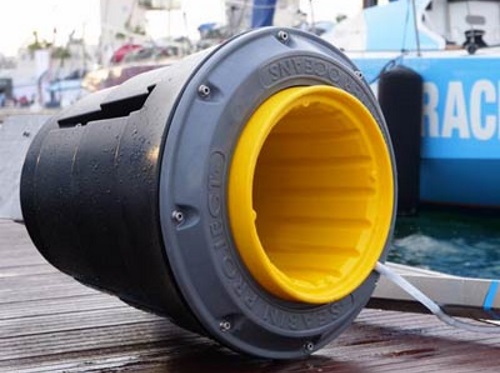 [Above photo by the Seabin Project]

Seabin devices work continuously to skim and collect marine debris from the surface of the water. Each receptacle can remove up to 3,000 pounds of marine debris annually, while also filtering out gasoline, oils, and “micro-plastics” from the water.

Grants from the Tennessee DOT and the national Keep America Beautiful organization provided the funds supporting this deployment of the Seabin devices.

The Tennessee DOT’s contribution includes the purchase and installation of 10 devices at locations throughout Tennessee, as well as funding for two years of water-based cleanups of the river and its tributaries within the state – funding made in conjunction with the agency’s “Nobody Trashes Tennessee” litter prevention campaign.

“[Our] partnership with Keep the Tennessee River Beautiful demonstrates the link between roadside litter and debris that ends up in our waterways,” explained Joseph Galbato, Tennessee DOT interim commissioner, in a statement. “Investing in this substantial network of litter removal devices is another example of how TDOT promotes innovative solutions to making our state cleaner and keeping our waterways clear.”

In addition to the 17 Seabins deployed in Tennessee, another two will deploy on the Tennessee River in Alabama, with one other placed on one of the river’s tributaries in North Carolina.

“Until now, all of our work has only been able to prevent micro-plastics in our waterways, so we are thrilled to the Tennessee DOT and Keep America Beautiful for these – as I see it – revolutionary grants and to our partners who will be maintaining the Seabins to make this trailblazing project possible,” added Kathleen Gibi, KTRB’s executive director.

The Tennessee DOT is an agency known for funding different and innovative ways to reduce littering.

For example, in April 2021, the agency helped fund a pair of new exhibits at the Tennessee Aquarium illustrate how micro-plastics and other roadside trash can negatively affect the health of the ocean as well as rivers, lakes, and streams.

The new exhibits – housed in the Aquarium’s “River Journey” and supporting the Tennessee DOT’s “Nobody Trashes Tennessee” litter reduction campaign – includes actual debris taken from the banks of the Tennessee River: the focus of its current Seabin deployment project.