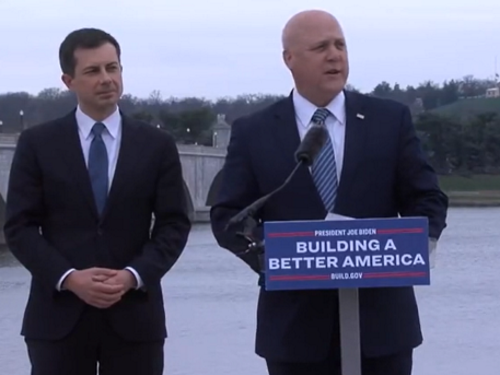 The U.S. Department of Transportation is making $2.9 billion in grant funding available for “major” infrastructure projects through a notice of funding opportunity or NOFO through its new Multimodal Projects Discretionary Grant initiative. The deadline for applications is May 23.

The $1.2 trillion Infrastructure Investment and Jobs Act or IIJA – signed into law in November 2021 – created the MEGA and RURAL programs, while the 2015 Fixing America’s Surface Transportation or FAST Act established the INFRA program.

Pete Buttigieg, USDOT secretary, said in a statement that combining three major discretionary grant programs into one NOFO reduces the burden for state and local applicants while increasing the pipeline of “shovel-worthy” projects.

“Until now, we had limited ability to make awards beyond a certain level, or to support projects with funding from multiple federal grant programs,” he said in a statement. “Under this approach and with a major infusion of new funding, we have the capacity to green-light more transformational projects that will create good-paying union jobs, grow the economy, and make our transportation system safer and more resilient.”

The MEGA program supports major projects that are too large or complex for traditional funding streams. USDOT said this new program provides grants on a competitive basis to support multi-jurisdictional or regional projects of significance that may also cut across multiple modes of transportation.

The existing INFRA program – which prioritizes freight-related highway projects, though some limited rail and port infrastructure is allowed as long as it reduces congestion on highways – is an existing competitive program that will see a more than 50 percent increase in 2022 funding due to the IIJA.

The IIJA provides approximately $8 billion for INFRA over five years, USDOT noted, with the agency making roughly $1.5 billion available through this NOFO alone.

The RURAL program supports projects to improve and expand the surface transportation infrastructure in rural areas to increase connectivity, improve the safety and reliability of the movement of people and freight, and generate regional economic growth and improve quality of life.

Projects eligible for RURAL grants include highway, bridge, and tunnel projects that help improve freight, safety, and provide or increase access to an agricultural, commercial, energy, or transportation facilities that support the economy of a rural area. In 2022, USDOT plans to award up to $300 million via the new RURAL grant program.

USDOT noted that making the grant money available for all three programs via a single NOFO “makes it easier for communities to apply to one, two, or three major discretionary grant programs with a single application and common set of criteria.”