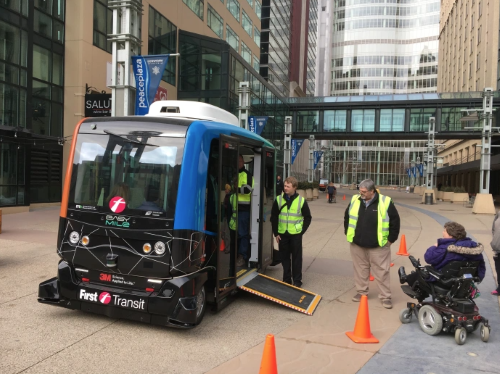 A new study by the University of Minnesota and a joint proof-of-concept technology test by Cisco and Verizon represent the latest efforts aimed at addressing the infrastructure needs of autonomous vehicles or AVs.

The university’s research – funded by a National Science Foundation grant – discovered that not much is known regarding how characteristics of the “built environment” correlates with AV acceptance.

“The few existing studies that looked at how the built environment could impact AV adoption used analysis areas that are too large for neighborhood-level planning,” explained Tao Tao, a PhD candidate in the university’s Humphrey School of Public Affairs, who helped with the AV study. “This prohibits planners from dealing with the impacts of AVs in the communities where they will first emerge.”

According to a blog post, to help transportation planners better understand where to focus their AV readiness efforts, Tao and his advisor – Professor Jason Cao – conducted research to determine how individuals’ interest in owning AVs in the future is associated with built environment variables and demographics.

Because AVs would let people use their travel time more effectively than conventional vehicles, they reduce the temporal cost of auto use—which, without policy interventions, would likely increase auto ownership, Tao said.

“To prevent an increase in auto ownership due to AVs in urban areas, planners should work to enhance the attractiveness of travel mode alternatives,” he noted. “In suburban and rural areas, growth management strategies could help mitigate potential sprawl. Additionally, strengthening express transit services to regional employment centers could be a promising strategy.”

Meanwhile, Cisco and Verizon are jointly pilot testing a way to “virtualize” roadside infrastructure to reduce the costs of broader AV deployment.

Those two companies collaborated on a proof-of-concept demonstration in Las Vegas, showing that cellular and mobile edge compute or MEC technology can enable autonomous driving solutions without the use of costly physical roadside units to extend radio signals.

Cisco and Verizon noted in a statement that the pilot test results “pave a simpler and more efficient route” to powering applications such as autonomous/unmanned last-mile delivery “bots” and “robotaxis” in cities like Las Vegas, where public MEC technologies exist.

Additionally, cities and roadway operators could create safer roads with cellular vehicle-to-everything or C-V2X technologies including pedestrian protection, emergency and transit vehicle pre-emption, on and off-ramp protection – such as when a loaded truck needs autonomous guidance to merge or brake safely – and potentially others that involve vehicles approaching intersections with traffic signals.

By using cellular and MCE to virtualize the role of the Roadside Units, C-V2X communications proved to be more streamlined – likely to result in improved efficiency and cost effectiveness for municipalities, infrastructure providers, and application developers working with autonomous vehicles, noted Krishna Iyer, Verizon’s director of systems architecture.

“This test is a huge milestone in proving that the future of connectivity for IoT [Internet of Things] applications can be powered by cellular,” Iyer said. “We’re marking the strength of mobile edge compute platforms for connected transportation innovation with much more streamlined architecture. Together with Cisco technologies, we’re setting the foundation potentially to realize a ubiquitous IoT in the connected and autonomous future of driving.”