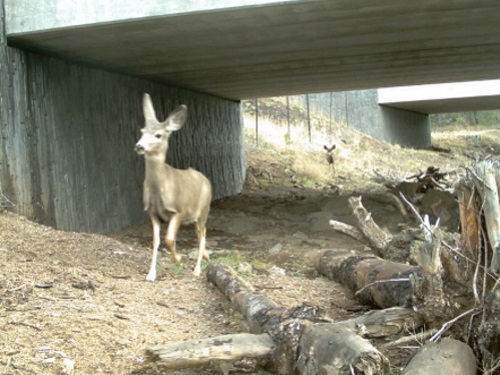 The Oregon Department of Transportation recently received a special one-time allocation of $7 million in general funds from the Oregon legislature to invest in wildlife corridor projects statewide.

[Above photo via the Oregon DOT]

The Oregon DOT said it has had “great success” with wildlife undercrossing structures in recent years, with five crossings built to date in the state, all on U.S. 97, leading to an 86 percent reduction in wildlife-vehicle collisions.

She added that, while this new funding will go a long way toward making our highways safer, Oregon DOT’s goal is to have yearly dedicated funding for wildlife corridor needs similar to how the state funds its fish passage program.

Other states – especially in the western parts of the country – are beefing up investments in wildlife passage programs and infrastructure. For example, California and Utah both have 50 wildlife passage structures, Nevada has 23, and Colorado leads the pack at 69.

Recently, the Colorado Department of Transportation and ABCO Contracting began installing three miles of new “high deer” fencing and earthen big game ramps along US Highway 24/285; a $2.26 million project that should wrap up in early September.

Additionally, the high deer fencing will tie into existing drainage structures that are sufficiently large enough to offer crossing locations for large game.

The new fencing will funnel wildlife to these locations, an important aspect of this project site, purpose, and design, noted Julie Constan, the agency’s regional transportation director.

“Wildlife-vehicle collisions make up approximately 60 percent of the total crashes along this stretch of highway,” she said in a statement. “The investment made to install the fencing will show us a tremendous benefit. Studies have shown that big game-vehicle collisions are expected to go down by at least 80 percent with the aid of fencing features.”