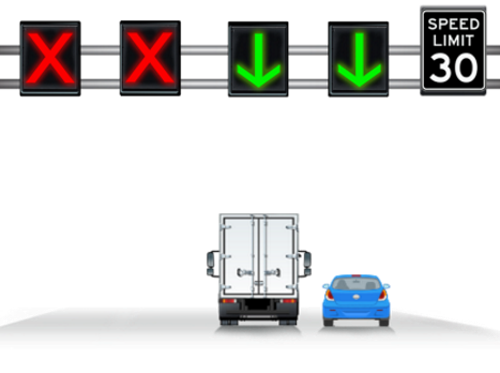 On April 3, the Tennessee Department of Transportation plans to start construction on Phase 2 of the I-24 SMART Corridor project, which seeks to integrate freeway and arterial roadway elements, along with physical, technological, and operational improvements, to provide drivers accurate, real-time information for actively managing traffic volumes.

[Above image via the Tennessee DOT]

Phase 2 of the project encompasses the installing of 67 overhead gantries or digital traffic signs over the east and westbound lanes of the interstate – a process expected to last until November – as part of the new intelligent transportation systems governing the corridor between mile markers 53 and 70.

The agency noted in a statement that it completed Phase 1 of this project in December 2021 and expects to wrap up Phase 2 by the spring of 2023.

The construction work on Phase 2 of this highway project comes on the heels of an effort to over 300 ultra-HD (4K) traffic cameras along a section of I-24 – an effort started in September 2021 that should wrap up this summer.

Undertaken by the Tennessee DOT, Vanderbilt University, the Arizona-based Southwest Research Institute, and consulting firm Gresham Smith, this camera deployment seeks to capture “every minute” of behavior by all of the vehicles traveling the “smart corridor” portion of I-24.

“This groundbreaking understanding of traffic is more important than ever due to the increasing automation capability of individual vehicles, which are beginning to influence traffic flow through their interactions with conventional vehicles,” explained Brad Freeze, the former director of Tennessee DOT’s traffic operations division, in a blog post at the time.