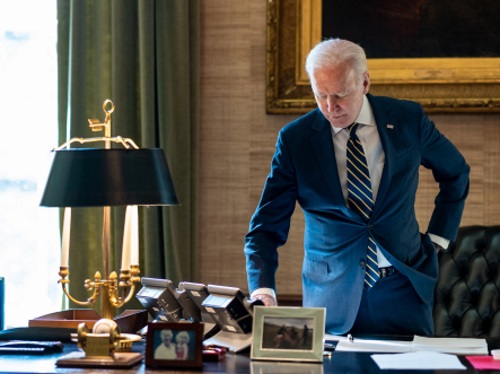 [Above photo by the White House]

The Biden administration’s proposed budget includes $142.3 billion in total gross budget authority for the U.S. Department of Transportation, an increase of $1.6 billion or 1.1 percent over the enacted level for FY 2022.

That includes an additional $36.8 billion in guaranteed “advanced appropriations” provided via the $1.2 trillion Infrastructure Investment and Jobs Act or IIJA, signed into law in November 2021.

That funding also includes $78.4 billion in Highway Trust Fund contract authority, an increase of $1.6 billion over the FY 2022 enacted level and $27.1 billion in regular appropriations, level with the amount enacted in FY 2022.

In a statement, the USDOT provided a modal breakdown of its proposed FY 2023 total budget authority:

In addition to the FY 2023 budget, USDOT has unveiled a new FY 2022-2026 Strategic Plan to provide a “roadmap” for how to invest the additional transportation funding provided by the IIJA.

Analysis by the American Association of State Highway and Transportation Officials indicates the proposed FY 2023 budget for USDOT honors full funding levels outlined in the IIJA. As a result, there are no funding changes to IIJA-authorized contract authority programs from the Highway Trust Fund and advance General Fund appropriations for FY 2023.

Unique to the IIJA, advanced appropriations in the bill play a key role within the law’s five-year funding plan, dedicating future revenue to specific transportation programs, which is something not easily undone by Congress.

AASHTO noted that the administration’s proposed budget for FY 2023 does not include any beyond-IIJA General Fund supplements on top of already-authorized funds seen in the last budget cycle, such as the bridge deck-based formula program and earmarked projects.

AASHTO noted that the 30 percent increase of USDOT salaries and expenses reflects a commitment by the agency to “staff up” to handle increases in discretionary grant programs funding and other initiatives funded by the IIJA.