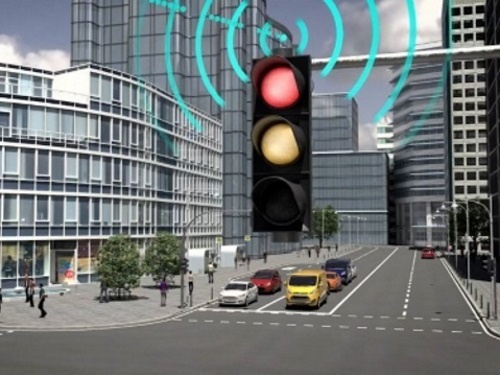 Over two years’ worth of testing conducted by Ford Motor Co. in Germany found that traffic signals networked via highway, urban, and rural roadway infrastructure to both connected and autonomous vehicles could help improve vehicle safety and reduce traffic congestion as well.

[Above image via Ford Motor Co.]

“Whether it’s a fire engine attending a blaze or an ambulance that is en route to an accident, the last thing anyone wants is for these drivers to be caught up among other vehicles waiting for the lights to change,” noted Martin Sommer, a research engineer with Ford’s European division, in a statement. “Congestion, as well, could be reduced with traffic lights sending the red-green timing information to approaching vehicles.”

Ford used one of its Kuga Plug-In Hybrids as a test vehicle – equipped with on-board units to communicate with roadway infrastructure and prototype software – to act as an ambulance and passenger vehicle for the different test scenarios on roads and streets in and around Aachen, Germany.

Ford engineers tested this traffic signal-vehicle communication system as part of the Corridor for New Mobility Aachen-Düsseldorf project, funded by the German Federal Ministry for Digital and Transport and supported by RWTH University Aachen, Vodafone, the road authority for North Rhine Westphalia, and the City of Aachen.

For testing an emergency response situation, the test vehicle signaled traffic lights to turn green. Once the vehicle passed through the junction, the traffic lights returned to standard operation.

For testing daily driving situations, the test vehicle received the timing information for when the traffic lights turned from red to green and green to red. Ford’s Adaptive Cruise Control technology then adapted the vehicle’s speed to help ensure a higher proportion of traffic encountered a green light – minimizing “harsh braking” and vehicle time spent at a standstill, helping reduce congestion.

Ford noted its test vehicle communicated with traffic signals via Cellular Vehicle-to-Everything or C-V2X technology, a unified platform that connects vehicles to roadside infrastructure, other vehicles and other road users.

[Editor’s note: Don Butler – executive director for connected vehicles and services at Ford – discussed the safety potential of C-V2X technology as part of a vehicle-to-vehicle connectivity presentation at the American Association of State Highway and Transportation Officials 2019 annual meeting.]

State departments of transportation have been engaged in similar traffic signal research in different parts of the country.

For example, researchers at Purdue University, in collaboration with the Indiana Department of Transportation, recently unveiled a new wireless communication device that could help save lives at high-speed traffic signals.

In addition, in 2018, a real-time traffic signal timing adjustment system installed by the Arizona Department of Transportation helped reduce travel times by roughly 10 percent for motorists along an 8.5-mile portion of State Route 77, the primary north-south route connecting Tucson and Oro Valley.