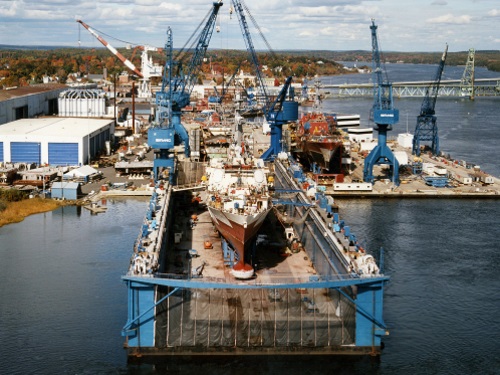 The U.S. Maritime Administration or MARAD is making nearly $20 million in fiscal year 2022 grants available to help modernize small U.S. shipyards and train their workforces. That follows the award of $19.6 million in grants made to 31 small shipyards in 15 states in April 2021.

[Above photo by the Bath Iron Works]

The U.S. Department of Transportation said in a statement that MARAD’s Small Shipyard grant program “strengthens the economic competitiveness of shipyards” by providing funds to purchase equipment or train employees. In addition, the purchase of American-made manufacturing equipment with small shipyard grants support a wide range of jobs throughout the U.S. manufacturing sector.

“Small shipyards strengthen our maritime industry and communities along and near our nation’s ports and waterways, employing thousands of Americans who ensure we maintain expertise and skills critical to our economic and national security,” noted Lucinda Lessley, MARAD’s acting administrator.

“In addition to being economic mainstays, U.S. shipyards demonstrate some of the most innovative shipbuilding in the world, and the Small Shipyard Grant Program encourages continued innovation,” she said.

A report issued by MARAD in June 2021 indicates shipbuilding and repair activity at both the national and state level by private U.S. shipyards in calendar year 2019 supported $42.4 billion worth of gross domestic product.

That report— entitled “The Economic Importance of the U.S. Private Shipbuilding and Repairing Industry” – found that the nation’s 154 private shipyards directly provided more than 107,000 jobs and contributed $9.9 billion in labor income to the national economy in 2019.

On a nationwide basis – including direct, indirect, and induced impacts – the industry supported 393,390 jobs, $28.1 billion of labor income, and $42.4 billion in GDP, the agency said.