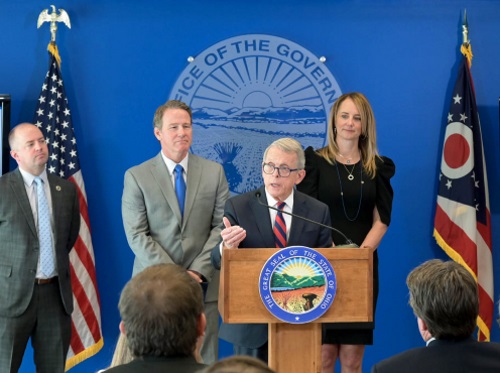 Governor Mike DeWine (R) (seen above at podium) recently outlined plans to invest nearly $2 billion on 829 transportation projects across Ohio as part of the Ohio Department of Transportation’s construction season plan for 2022.

[Above image via the Ohio Governor’s Office]

“Ohio is a state that makes and moves things, and a solid transportation system is key,” said Gov. DeWine in a statement. “Our investments have made Ohio an attractive place to do business, and ongoing improvements to our roads are essential for continued economic development and the safety of our travelers.”

While overall traffic volumes in Ohio continue to trend slightly below pre-pandemic levels, the Ohio DOT said truck traffic is more than 13 percent higher than the same period in 2019 and showing no signs of slowing down.

Since 2019, the agency said it has invested nearly $6 billion into more than 2,800 transportation projects, with more than $450 million spent on safety projects like Safe Routes to School. That also includes nearly 400 pedestrian safety projects in Ohio’s eight largest cities where pedestrian-involved crashes are far too common.

“We’re constantly looking for ways to better engineer our roads to ensure they’re as safe as possible for those who use them each day,” he said. “However, drivers have an important role to play too. We need every motorist to buckle up, obey the speed limit, drive sober, and drop the distractions.”

The agency is involved in a variety of projects designed to improve safety across a number of areas – from reducing wrong-way driver incursions to creating “safety corridors” in partnership with the Ohio State Highway Patrol.

Work zone safety is another major focal point for Ohio DOT as well as state departments of transportation across the country. In 2021, 4,796 crashes occurred in work zones across Ohio, with 35 percent of them occurring with workers present. The agency noted that 30 people died in 26 of those crashes, with Ohio DOT workers, vehicles, and equipment hit 154 times in work zone crashes in 2021.

“The men and women working on these construction projects are doing dangerous work,” Marchbanks stressed. “Motorists can make it less dangerous by paying extra attention, moving over, and slowing down when they see our crews.”

The agency added that speed is one of the biggest issues in work zone crashes. In 2021, the Ohio State Highway Patrol issued 6,015 citations in work zones with 41 percent being more than 20 mph over the posted speed limit.