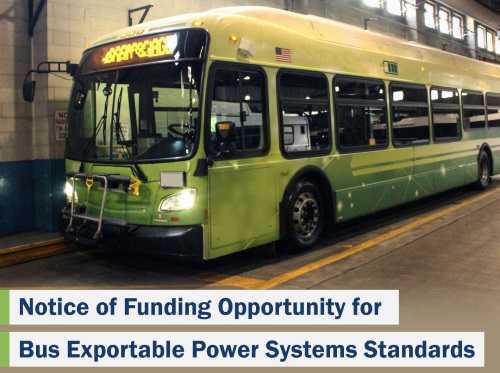 To help communities respond to natural disasters, the Federal Transit Administration is offering $1 million in grants via a notice of funding opportunity so an organization or partnership can develop standards for “exportable power systems” from electric and fuel cell-powered buses.

Such systems would turn those buses into “mobile generators,” which could supply electricity to community buildings, emergency shelters and hospitals during power disruptions.

FTA said the Bus Exportable Power Systems or BEPS program – funded as part of the $1.4 trillion fiscal year 2021 omnibus appropriations act enacted in December 2020 – is one of the first steps in an initiative to build community resilience through transit systems. Applications for this grant funding are due by June 13.

“Under this program, we will advance the development of standards for exportable power systems, so that communities can take advantage of the power stored by high-tech transit buses to keep the lights on during natural disasters and other emergencies,” she said.

FTA pointed to a report published in February 2020 that showed success in transforming hybrid, electric and fuel cell buses into mobile power generators. The BEPS NOFO seeks an organization or partnership to develop interoperable national standards for power generation so a variety of manufacturers’ systems can use the same technology and applications for bus power generation.