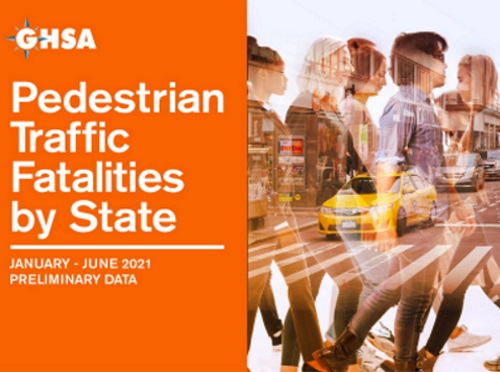 [Above image via GHSA]

This “troubling projection,” GHSA said, continues a “decade-long trend” of rising pedestrian deaths on our roadways and comes as speeding, impaired and distracted driving, and other dangerous driver behaviors remain at unacceptably high levels.

GHSA’s annual Spotlight on Highway Safety report offers the first look at state and national trends in 2021 pedestrian traffic deaths, based on preliminary data provided by State Highway Safety Offices in all 50 states and the District of Columbia.

According to GHSA’s analysis – conducted by Elizabeth Petraglia, Ph.D., of research firm Westat – a combination of factors is causing this surge in pedestrian deaths, including a surge in “dangerous driving” that began at the start of the COVID-19 pandemic and has not abated.

“Walking is the most basic form of transportation, but there is a pedestrian safety crisis due to drivers speeding, being impaired or distracted, or engaging in other dangerous behaviors,” GHSA Executive Director Jonathan Adkins noted in a statement.

“We need to leverage everything that works – infrastructure improvements, changes to road design, equitable enforcement of traffic safety laws and community outreach – to reverse this deadly trend and make our roadways safe for people walking, biking and rolling,” he added.

The increase in pedestrian fatalities over the first half of 2021 is part of a long-term trend GHSA has identified of roadways becoming more dangerous for people on foot.

Over the last decade, pedestrian deaths have skyrocketed by more than 2,000 – from 4,457 in 2011 to 6,516 in 2020 – which is a 46 percent increase. Overall traffic fatalities are also surging as well, as the National Highway Traffic Safety Administration reported that 31,720 people died in crashes over the first three quarters of 2021, which is the highest number of fatalities during the first nine months of any year since 2006.

At a state level, pedestrian fatalities increased in 39 states and D.C. during the first half of 2021, with 11 states experiencing declines in the number of pedestrians killed by drivers, with three states reporting two consecutive years of declines and two states posting double-digit fatality reductions in 2021.

GHSA’s analysis also noted that three states – California, Florida and Texas – accounted for 37 percent of all pedestrian deaths in the first six months of 2021. These states have warmer climates, which tend to increase travel on foot, as well as many urban areas where pedestrians and motor vehicles are more likely to share the road, GHSA noted.