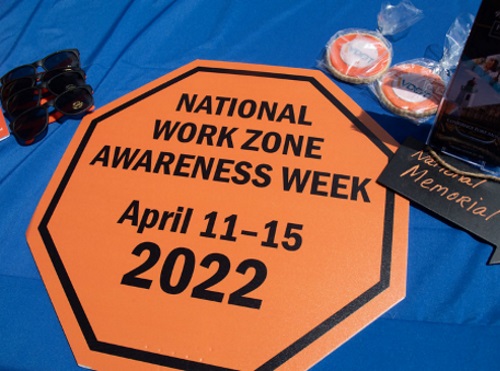 Across the country, state departments of transportation supported the 2022 National Work Zone Awareness Week or NWZAW safety campaign, held from April 11 through April 15, in a variety of ways.

The annual NWZAW campaign, now in its 22nd year, is a national public outreach effort that coincides with the start of the spring construction season for roadwork.

Julius Codjoe, special studies research administrator at Louisiana Department of Transportation and Development, noted in a special Transportation Research Board report that motorists unexpectedly coming upon slow or stopped traffic is the “usual cause” behind most work zone crashes. “We know the more unexpected traffic queues you have, the more safety issues that are going to come up,” he said.

The Federal Highway Administration held a NWZAW kick-off event with the Virginia Department of Transportation near the Hampton Roads Bridge-Tunnel Expansion Project in Hampton Roads, VA, on April 12.

“You need to remember there are human lives behind these barrels and those orange signs working to improve our lives,” noted W. Sheppard “Shep” Miller III, Virginia’s secretary of transportation, at the event. “These are sons and daughters, husbands and wives, loved ones, your neighbors – all on a mission to keep Virginia moving safely. We want to keep everyone safe, whether you are working on the road or traveling on them.”

Virginia, like many states, highlighted the number of people killed in work zone crashes – which grew significantly from 11 fatalities in 2020 to 28 in 2021. The majority of lives lost in work zones are motorists, not road workers, the agency added – noting that, nationwide, 85 percent of those who died in a work zone were motorists or passengers.

State DOTs engaged in a variety of outreach efforts over the course of the 2022 NWZAW campaign.

The Mississippi Department of Transportation hosted a ceremony on April 13 to honor the 48 agency employees who lost their lives while working to maintain Mississippi highways.

“One of the things I’ve always loved and admired [and] that really gave me the desire to come back to the department is the sense of family that exists within it,” said Brad White, the agency’s executive director, in a statement.

“We would like for all of the family members of our lost team members to know that our love and our prayers are still with each and every one of you,” he added.

“We are going to do everything that we can to meet our goal of zero lives lost on our highways and zero lives lost in our work zones,” stressed WVDOT Secretary Jimmy Wriston in a statement.

“This is a united front with our partners in law enforcement. We’re serious about this,” he added. “The days of talking your way out of these tickets are over and the fines you’ll face in work zones are doubled.”

On April 12, the Connecticut Department of Transportation broadcast a special “Connecticut Work Zone Awareness Week” event live on its Facebook page to raise awareness about the dangers of work zones to help increase work zone safety.

“Now is the time to remind everyone of the importance of paying attention as they approach and drive through work zones, so motorists, pedestrians, and roadway workers remain safe,” noted Connecticut DOT Commissioner Joseph Giulietti in a statement.

“Everyone must share the responsibility for work zone safety. Please, don’t wait until you’re in the work zone to reduce your speed,” he emphasized. “When you see orange, slow down.”

The Ohio Department of Transportation noted that motorists hit its workers, vehicles, and equipment 154 times in 2021, resulting in five injuries. Yet, just four months in 2022, the agency said motorists have struck its crews, vehicle, and equipment more than 70 times.

“Speed and distracted driving are two of the biggest issues we see in our work zones,” noted Jack Marchbanks, Ohio DOT’s director, in a statement. “Move over, slow down, and above all pay attention when you’re on the road. The lives of our men and women depend on.”

He added that, in 2021, the Ohio State Highway Patrol issued 6,015 citations in work zones across the state, with 41 percent being more than 20 mph over the posted speed limit.

“It takes safe drivers plus safe workers to have safe work zones,” emphasized Kentucky Transportation Cabinet Secretary Jim Gray in a statement. “On any given day, the ‘office’ for a work zone crew may be the emergency shoulder, a grassy median or a blocked-off driving lane. These crews work in hazardous conditions every day.”

The Utah Department of Transportation put together a special video focusing on the families waiting for their loved ones in highway work zones to come home safe after each shift.

To that end, the Kansas Department of Transportation interviewed four Kansas Highway Patrol troopers scattered across the state to understand why work zone crashes occur – and how everyday motorists can help reduce the chances of such crashes occurring.

“It’s important to always pay attention because the roadways can change throughout construction zones,” noted Lt. Candice Breshears, a Kansas Highway Patrol spokeswoman, as part of those interviews. “Even if there are no workers present that you notice, the company could be moving equipment, or the speed limit could be for your safety, such as if there is a drop-off between lanes.”