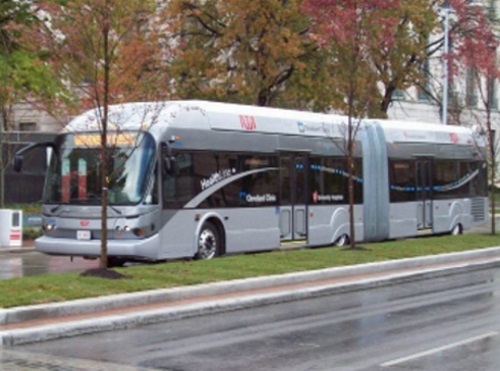 A new study compiled by Ohio State University found that “high-quality” bus rapid transit or BRT systems could boost the value of multi-family residences located near them.

While BRT did not have a negative impact in most of the cities studied, the university’s researchers said they did improve multi-family property values in some cities such as Cleveland, which may be a model that some other cities can follow

Ohio State’s study – published in the Journal of Transport Geography – compared the “before-and-after effect” of BRT systems in 10 cities across the U.S on property price data from 1990 to 2016. The researchers determined that, unlike traditional bus services, “amenity-filled” BRT routes do not generally harm property values – especially if they feature dedicated bus lanes.

In addition to Cleveland, the study examined BRT systems in Seattle; Eugene, OR; Oakland; Los Angeles; Kansas City; Chicago; Pittsburgh; Boston; and Miami. The study also controlled for neighborhood attributes that might change over time such as race, income, education, in addition to proximity to jobs and green space. Results showed that three of the 11 BRT systems experienced property value increases near stations, one system experienced a decrease and the remaining seven showed no significant changes.

However, multi-family residences in the Cleveland Healthline BRT service area experienced a 41.5 percent increase to their property values, compared to properties located in similar neighborhoods farther away. The researchers credited the success of the Cleveland Healthline BRT service in increasing property values to the fact that it operates along a major thoroughfare, it has dedicated bus lanes, and the corridor experienced $7 billion of new investments, including major streetscape renovations. That helped lead to a 138 percent increase in ridership compared to the bus service it replaced.

Multi-family properties may be the main beneficiary of rising property values linked to BRTs because these bus systems make commuting without cars easier and thus encourage more dense housing, study co-author Harvey Miller, professor of geography and director of the Center for Urban and Regional Analysis at Ohio State.

“The only time BRT harms property values is if you have stations surrounded by parking. That means that the BRT stations are not walkable and not well integrated into the city,” he said in an Ohio State news story. “Overall, the study results suggest BRT, if done right, can encourage more dense housing and improve some property values.”