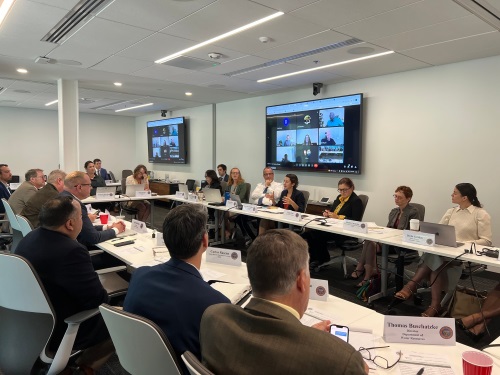 To ensure the “efficient and effective” use of funds coming from the $1.2 trillion Infrastructure Investment and Jobs Act or IIJA enacted in November 2021, Arizona recently established a task force to align state-level infrastructure “priorities and investments” with federal funding opportunities.

[Above photo by the Arizona Governor’s Office]

“In the last seven years, Arizona has made significant investments in broadband expansion, energy grid resilience, and more infrastructure improvements,” noted Governor Doug Ducey (R) during a special “kick off” ceremony for the new task force.

“Especially throughout the pandemic, we utilized federal and state funds to continue to build on Arizona’s economic resiliency,” he said in a statement.

“We will take full advantage of its competitive funding and optimize these once-in-a-generation funds to support our state’s future,” the governor noted.

“It’s not just about the things we build, but the people and the lives we will impact for generations to come,” explained Webber.

“We often don’t think about infrastructure, but it’s a part of our daily lives,” she noted. “The IIJA Task Force will set Arizona up for success by building a framework for our state to compete for funding and administer funding statewide.”

Webber added that the task force seeks to enhance collaboration, optimize investments, and track performance related to IIJA in Arizona – working with local leaders, private industry, and tribal governments to coordinate funding disbursements over the next five years.