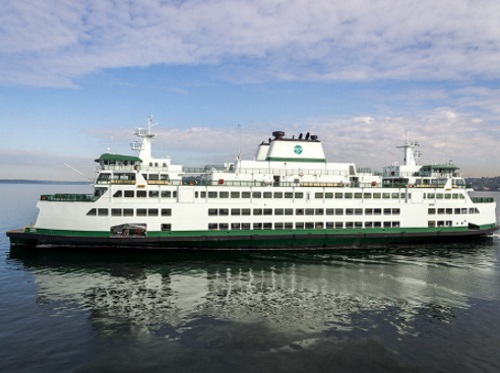 The Seattle Maritime Academy is part of Seattle Central Community College and the facility is located on the shore of Lake Union in Seattle. Marine engineering students train in classrooms, aboard vessels and in a state-of-the-art engine room simulator.

“There’s huge demand for merchant mariners, not just at Washington State Ferries, but across the entire industry,” noted Dale Bateman, an associate dean at the academy, who hopes to reach people who may have never thought about a career in the maritime sector.

“We offer a fast-track program to train the next generation of mariners,” he added. “Students in the marine engineering technology unit can graduate and be on the water in as little as a year.”

Nicole McIntosh, WSF’s chief of staff, said her division’s enrollment outreach, as well as ongoing recruitment, encourages people from communities of color, women and other under-represented groups in the maritime industry to consider maritime training and careers.

Around one-in-four of WSF’s current engine room employees graduated from the maritime academy and it is critical to ferry customers and the Puget Sound region that this workforce pipeline continues to flow, she added.

“Engine room employees are a part of ferry operations that a lot of people don’t know exist, yet they’re absolutely vital to ensure the largest ferry system in North America can safely serve the people of Washington,” McIntosh noted in a statement. “The jobs can pay more than $60 per hour and once on board there is a clear career path.”

Creating new opportunities for advancement and on-the-job learning for both current and newly recruited employees, along with providing more work-life balance, are becoming key workforce strategies for state departments of transportation now and in the future.

For example, a panel discussion held during the 2021 virtual spring meeting of the American Association of State Highway and Transportation fleshed out how state DOTs are trying benefit from strategies.

“We have a mission that inspires, and while I know that sounds Pollyannaish, we are finding young people – Millennials and Gen Z – are inspired by such a mission,” explained Jack Marchbanks, director of the Ohio Department of Transportation, during that session.

“We’ve had great success hiring younger people and re-purposing mid-career folks due to that mission,” he said. “That is because the obvious social good well-planned infrastructure provides to society is undeniable.”

Marchbanks noted that all the dimensions of a state’s transportation network – such as roads, railroads, maritime, and aviation – creates an “unlimited palate” of pursuit in terms of infrastructure work opportunities.

“For example, we’re working with NASA on urban air mobility models,” he said. “We’re also involved in environmental and smart mobility projects, too. That diversity of opportunity helps keep the people we have and attracts others to us.”