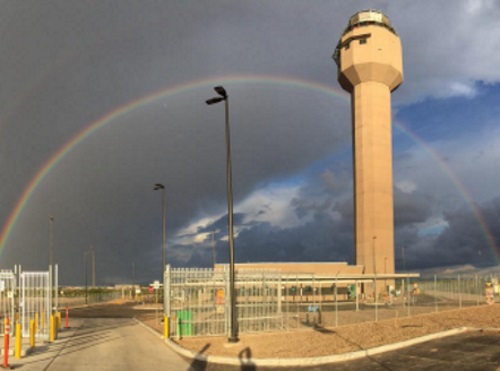 [Above image via the FAA]

FAA and U.S. airports initiated an overarching “Airport Climate Challenge” to help achieve the Biden administration’s goal of net-zero emissions by 2050. Airports can take advantage of several FAA funding programs to meet this goal, including grants for low- or zero-emissions vehicles, renewable energy production, energy assessments and other efforts.

The FAA also plans to develop a tool for airports to voluntarily estimate, track and report on the emissions reduction achieved when implementing projects supported by the airport programs.

The White House also announced its Sustainable Aviation Fuel Grand Challenge, a government-wide initiative designed to catalyze the production of at least three billion gallons per year by 2030.

Meanwhile, FRA launched a “Climate Challenge” that seeks the participation of national rail network owners and operators as well as rail equipment manufacturers in an industry-wide effort to reach net-zero GHG emissions by 2050.

FRA said its Climate Challenge builds on the strengths of rail transportation by encouraging the rail industry to decarbonize its operations, which will ensure that rail continues to be a model of sustainability and resiliency well into the future.

FRA will highlight those companies that meet or beat its challenge and support the reduction of transportation emissions by expanding access to rail transport, while collaborating with the rail industry to research and develop more renewable energy sources.

In order to leverage every opportunity to combat climate change, FRA is also working with the Environmental Protection Agency and its SmartWay program, which emphasizes supply chain sustainability by helping freight transportation companies measure, benchmark, and improve their energy efficiency.