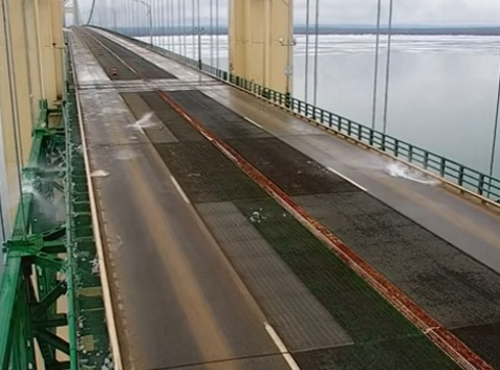 A new video issued by the Michigan Department of Transportation and the Mackinac Bridge Authority (MBA) details the hazards posed by large chunks and spears of ice that sometimes plummet from the 300-foot tall towers and cables of the Mackinac Bridge – hazards that require closure of the span to ensure the safety of motorists.

“In the case of falling ice, it is so dangerous, that it’s cut and dried that we have to close the bridge,” explained Kim Nowack, the MBA’s bridge director, in a statement. “We know it’s a big inconvenience and we absolutely hate to close the bridge. We only do it in extreme circumstances.”

“Seeing all these big chunks come down… it could hurt somebody really bad, if not kill,” added Joe Shampine, the MBA’s maintenance supervisor, who was in a vehicle struck by ice falling off the Mackinac Bridge.

Nicknamed the “Mighty Mac” and spanning the straits of Mackinac in northern Michigan since 1957, the Mackinac Bridge is five miles long and is the fifth longest suspension bridge in the world.

The bridge has closed due to falling ice 28 times since 1995, for an average duration of roughly five hours per closure.

Mackinac County 911, using its RAVE Alert System, sends updates and information from the MBA to user cell phones any time the bridge undergoes a partial or full closure due to weather or other conditions.