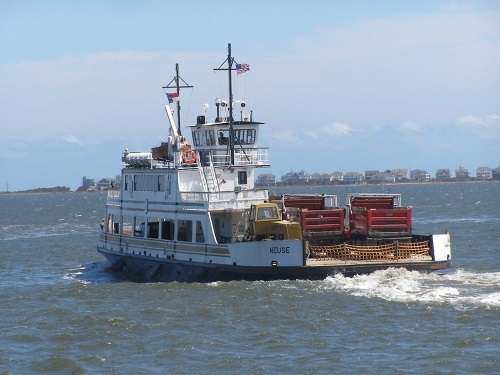 “Getting this urgent dredging operation underway has been a top priority for several months,” said NCDOT Ferry Division Director Harold Thomas in a statement.

“We’d like to thank the Army Corps of Engineers, the U.S. Coast Guard, the N.C. Department of Environmental Quality and the Hyde County government for their help in getting us to this point,” he said.

Upon completion, the dredging project will result a deeper, wider channel that will eventually lead to the return of larger, river-class ferries to the Hatteras-Ocracoke route.

Larger vessels will allow for the transportation of more vehicles and more people per each ferry departure, helping to alleviate traffic congestion issues on this particular ferry route.

The Hatteras-Ocracoke route switched to its full spring schedule on April 12, increasing the number of scheduled daily departures from 18 to 26 from each side.

In October 2020, the U.S. Department of Transportation designated the North Carolina Ferry System (NCFS) as a marine highway project: a first for the state.

The agency’s Maritime Administration noted that marine highways are “navigable waterways” that are used as “alternate options” to traditional transportation methods – such as highways – for moving freight.

That designation also enables the NCFS to apply for federal funding that can be used to modernize its vessels and improve infrastructure at terminals; further allowing for the streamlining of maintenance to meet the region’s needs of efficient transportation of freight and vehicles.