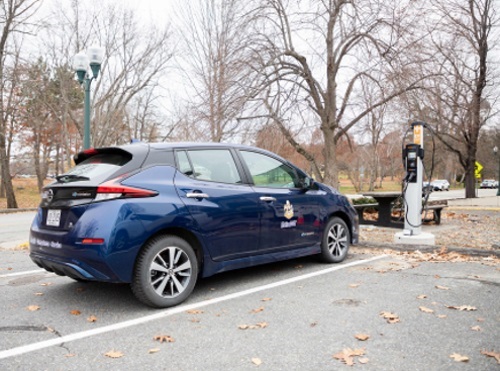 A new report compiled by The Ray and Geotab Inc. seeks to help state and local governments determine the optimal locations and design parameters for electric vehicle or EV charging stations for both passenger and freight vehicles.

The basis of the report comes from analysis of vehicle telematics data recorded by Geotab from two highway corridors – a regional route along I-20 from Dallas to Atlanta, and a local route from the Port of Savannah, GA, to the inland port in Atlanta.

Geotab developed and provided “data visualization tools,” such as graphs and heat maps, from vehicles traveling those routes equipped with its transponder. That data then allowed The Ray – a Georgia-based corporate venture devoted to roadway technology testing – to more easily the vehicle travel patterns within each corridor.

In turn, state departments of transportation can use such information to develop more “precise” highway electrification plans, especially in terms of strategically siting charging stations.

“Our cooperation and data analysis with The Ray will support the strategic positioning of charging infrastructure to help achieve the highest probability of success from the first  day of deployment which will in turn help expedite freight EV adoption,” said Charlotte Argue, senior manager of fleet electrification at Geotab, in a statement.

“By leveraging telematics and data from connected vehicles to help identify and meet the infrastructure needs of freight vehicles, states can be confident in their investment and ability to deliver effective and convenient charging infrastructure along U.S. interstates,” she said.

Used together, those tools should provide state DOTs with the opportunity to connect the demand of high-powered EV charging stations with the potential production of solar-based electricity production systems located in highway right-of-ways.

“Findings from our pilot corridors underscore the need for data from additional corridors throughout the country to set states up for success,” Kelly said.

“The telematics technology from Geotab, together as an overlay to The Ray’s solar mapping tool, will help transportation planners start one step ahead by developing infrastructure how and where it’s needed most, and determining which locations are optimal for co-locating EV charging and solar arrays on the roadsides,” she pointed out.

In March, AASHTO helped establish a free repository of information on electric vehicles available to state agencies. Called the “EV States Clearinghouse,” it contains a variety of documents such as sample requests for proposals or RFPs, sample contracts, EV infrastructure siting and assessment tools, plus other resources.

Those tools and documents can help state agencies deploy the funding for EVs created in the $1.2 trillion Infrastructure Investment and Jobs Act or IIJA – signed into law in November 2021 – which created the National Electric Vehicle Infrastructure or NEVI formula program.

That program will allocate $5 billion to states through formula funds over the next five years to build out EV charging infrastructure.