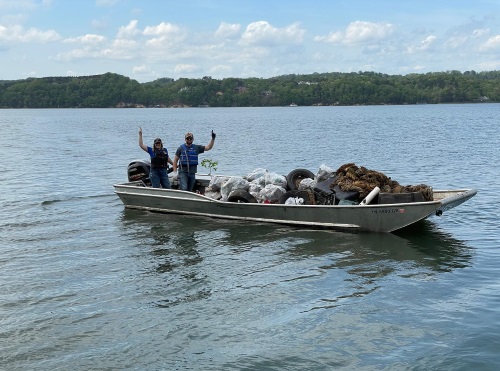 Around the country, state departments of transportation conducted or participated in a variety of pollution mitigation efforts on April 22 in honor of Earth Day.

Some 30 employees with the Tennessee Department of Transportation helped clean up areas around Chickamauga Lake along the Tennessee River.

The event – sponsored by the agency’s Nobody Trashes Tennessee public education campaign and Keep the Tennessee River Beautiful (KTRB) – deployed a 26-foot workboat to clean up shorelines and coves.

“There is a strong correlation between roadside litter and water quality,” noted Denise Baker, Tennessee DOT’s transportation program supervisor, in a statement. “What starts as litter on land, can make its way into our waterways.”

The agency also promoted a number of environmental-friendly resources on its website as part of its Earth Day campaign.

The Tennessee DOT and KTRB also recently teamed up with other partners to establish a network of 17 “Seabin” automated litter and debris removal devices across the Tennessee River watershed.

In addition, in April 2021, the agency helped fund a pair of new exhibits at the Tennessee Aquarium to illustrate how micro-plastics and other roadside trash can negatively affect the health of the ocean as well as rivers, lakes, and streams.

The new exhibits – housed in the Aquarium’s “River Journey” and supporting the Tennessee DOT’s “Nobody Trashes Tennessee” litter reduction campaign – includes actual debris taken from the banks of the Tennessee River: the focus of its current Seabin deployment project.

“Our research shows that accidental littering from unsecured loads and deliberate tossing of trash from vehicles contribute equally to what ends up along highways,” explained Chris Hughes, Ohio DOT District 1 deputy director, in a statement. “It’s especially visible at entrance ramps as vehicles enter the highway,” he said.

So far this year, Ohio DOT has collected 12,035 bags of litter along highways in the northwestern part of the state alone. Statewide, the agency said it spends approximately $4 million each year picking up about 400,000 bags of trash.

He has also proposed legislation (House Bill 5039) that seeks to adopt stronger emissions standards for medium and heavy-duty vehicles, which his administration said accounts for as much as 53 percent of nitrogen oxide emissions, despite being only 6 percent of the on-road vehicle fleet.

“We know that communities of color and other vulnerable communities have been the most impacted by harmful air pollution caused by transportation,” noted Connecticut DOT Commissioner Joseph Giulietti in a statement.

“[We are] committed to investing in sustainable solutions that protect the environment and keep communities healthy,” he added. “We are doing our part to create a cleaner, more equitable, and resilient transportation system.”