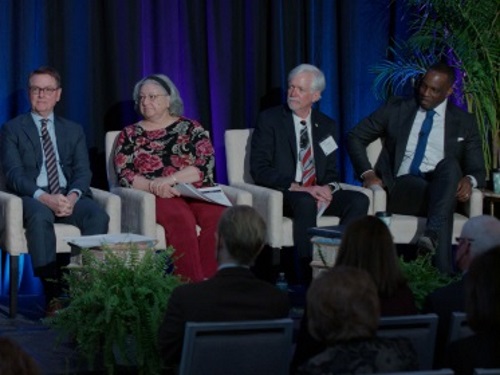 A “knowledge session” sponsored by AECOM during the American Association of State Highway and Transportation Officials 2022 Washington Briefing on March 2 discussed how  state departments of transportation could use funds from the $1.2 trillion Infrastructure Investment and Jobs Act or IIJA to improve the nation’s transportation systems.

Each speaker discussed a separate topic related to implementing the IIJA, enacted in November 2021. Bhatt twice served as a state DOT chief executive – first at Delaware DOT and then at Colorado DOT – and noted that “the idea of the discussion was to step back and think about what the IIJA looks like 20 years from now, 30 years from now, and what will people say and what do you want them to say?”

He stressed that there are “vast and profound” implications for the United States for not having adequate infrastructure, Bhatt said – which is why he believes it is critical that state DOTs “step back” from the tactical day-to-day needs of project funding to get a more “strategic sense” of the impact of projects in the decades ahead.