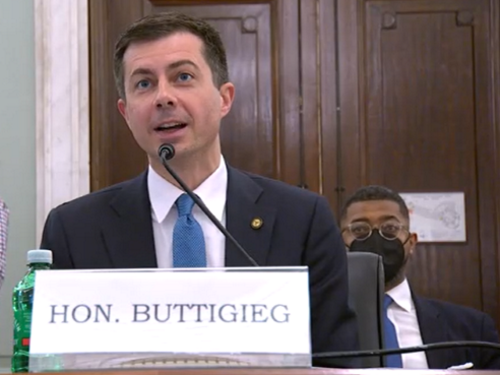 U.S. Department of Transportation Secretary Pete Buttigieg (seen above) sketched out his agency’s “top priorities” in relation to proposed fiscal year 2023 spending in testimony before two different Senate committees over the past two weeks.

“Safety remains our top priority [with] the budget including funding to help address the crisis of deaths on America’s roadways, as outlined in our National Roadway Safety Strategy,” he said in his testimony. “That includes $3 billion for the Highway Safety Improvement Program.”

Other key initiatives include:

“We understand that the tremendous opportunity we’ve been given to help modernize our country’s infrastructure comes with a profound responsibility to use taxpayer dollars efficiently and wisely – and to make resources more accessible to state and local governments so they can build good projects,” Buttigieg explained to the Appropriations Committee.

“This type of infrastructure transformation only happens at most once every generation, and it only happens if we work together,” he said.

He made similar comments in testimony before the Senate Committee on Commerce, Science, and Transportation on May 3.

“Another urgent priority is addressing the pandemic-driven supply chain disruptions and accompanying inflation, while also ensuring the nation’s supply chains are resilient into the future,” he said. “We’ve made available an unprecedented level of funding to modernize America’s port infrastructure – all designed to help move record amounts of goods more quickly, and to stem the rising costs of shipping.”

“To keep making progress on supply chains to help move goods faster and fight inflation, we will invest a total of $680 million to modernize ports, $3 billion to improve the roadways that carry the majority of America’s freight, and a total of $1.5 billion for CRISI [Consolidated Rail Infrastructure and Safety Improvements] grants to improve freight rail,” he noted.

“That’s just a sample of the improvements the American people will experience when they drive, fly, ride, and shop, as enhancing our transportation systems directly helps lower the transportation costs of goods and services,” Buttigieg said.