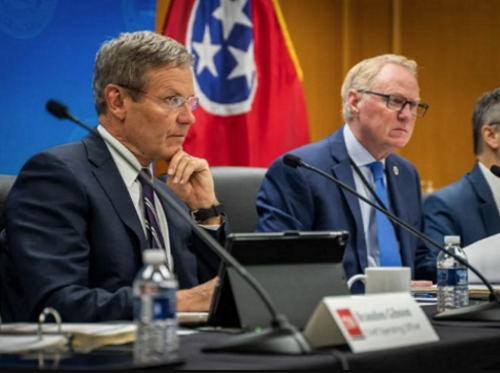 Governor Bill Lee (R) has appointed Deputy Governor Butch Eley (seen above at right with Gov. Lee at left) to serve as commissioner of the Tennessee Department of Transportation in addition to Eley’s current duties.

[Above photo via the Tennessee Governor’s Office]

Eley replaces former Commissioner Clay Bright, who Gov. Lee appointed as the CEO of the Megasite Authority of West Tennessee in October 2021.

Eley also serves as the commissioner of Finance and Administration in addition to his deputy governor position.

In his role as the state’s chief financial officer, Eley has developed multiple state budgets and works closely with legislative leaders of the Financial Stimulus Accountability Group to oversee and allocate the influx of federal relief funds provided to Tennessee over the past two years.

“As Tennessee experiences unprecedented growth, we’re prioritizing record investments to modernize infrastructure and prepare our state for the future,” said Gov. Lee in a statement. “Butch’s significant private sector experience and service as our chief financial officer make him well-positioned to lead the Department of Transportation during this critical time for Tennessee’s development.”

The governor’s slate of strategic investments to prepare for the state’s expected economic growth include $619 million to support major economic development projects and increase mobility across Tennessee’s fastest-growing counties.

Eley previously served as chief operating officer in the governor’s office from January 2019 to May 2020, where he led the state’s first four-year strategic planning process.

Prior to joining Gov. Lee’s administration, Eley was a founder and CEO of Infrastructure Corporation of America or ICA. Headquartered in Nashville, ICA was one of the nation’s leading infrastructure management companies with comprehensive asset management contracts throughout the country.

Eley earned his bachelor’s degree and Master of Business Administration at Belmont University.