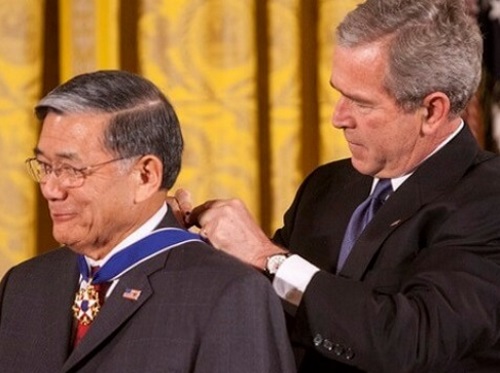 Norman Yoshio Mineta (seen above at left), the first Asian-American to hold a cabinet-level post, passed away at age 90 on May 3.

[Above photo via the National Archives]

Mineta graduated from the University of California-Berkeley School of Business Administration in 1953 with a degree in business administration, then joined the U.S. Army and served as an intelligence officer in Japan and Korea, before returning to civilian life by joining his father in the Mineta Insurance Agency.

He won election in 1974 to the House of Representatives in what was then California’s 13th congressional district. Mineta served in the House until 1995, co-founding the Congressional Asian Pacific American Caucus and serving as its first chair.

“His guidance in the aftermath of the 9/11 terrorist attacks – both immediately and in long-term response – is just one example of his strong and consistent leadership in a time of great need,” noted Jim Tymon, executive director of the American Association of State Highway and Transportation Officials, in a statement.

“Secretary Mineta’s lifetime service to his country, his ability to work with people across the political divide, his far-reaching knowledge, and his reputation as a leader who would get the job done are all part of his profound legacy,” Tymon added. “We are grateful for all he gave to make our communities better and safer and know his impact on the transportation industry will live on for decades to come.”

Following his stint as transportation secretary, Mineta served as vice chair for Hill+Knowlton and vice chair of L&L Energy. He also went on to found the Mineta Transportation Institute, served as chair of a panel of the National Academy of Public Administration overseeing a study of modernization efforts at the U.S. Coast Guard, and served as co-chair of the Joint Ocean Commission Initiative.