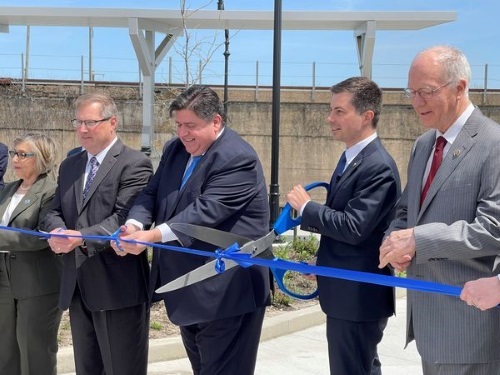 The Illinois Department of Transportation hosted a ceremony on May 4 to open the final phase of the Joliet Gateway Center, a new Pace bus station connected to Metra and Amtrak passenger rail service.

[Above photo via the Illinois DOT]

Governor J.B. Pritzker (D) and U.S. Department of Transportation Secretary Pete Buttigieg joined Illinois DOT and other officials to open the station; a $9.7 million project made possible, in part, through $7.5 million in funding from the governor’s Rebuild Illinois plan, established in 2019.

“Illinois is proud to dedicate nearly $40 million to the Joliet Multi-Modal Transportation Center, support made possible in part by Rebuild Illinois,” the governor said in a statement.

“Investments like these do more than just connect cities,” he added. “They allow our residents to access opportunities beyond their immediate neighborhoods, streamline regional collaborations, and open doors for new jobs and new businesses.”

The new facility includes a turnaround for buses as well as parking improvements and vehicle and pedestrian access. It also features 13 loading areas for buses, with passenger islands that include canopies and shelters. Sidewalks accessible for riders with disabilities and public restrooms are included.

Originally opened in 2018, the Joliet Gateway Center was the first rail station project in Joliet in nearly a century and tied together multiple modes of transportation in one safe, convenient location.  Done in partnership between IDOT and the City of Joliet, the project involved federal, state and local funding, as well as contributions from passenger and freight railroads.

“This latest improvement to the Joliet Gateway Center shows how investing in infrastructure can revitalize communities and make them safer in innovative, exciting ways,” said Illinois DOT Secretary Omer Osman. “Rebuild Illinois has been a catalyst to connect our state through affordable, accessible and multiple modes of transportation.”