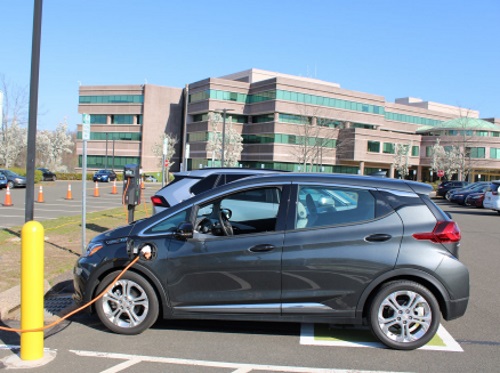 A 19-page report issued by the American Lung Association in March claims that making a wholesale shift to electric vehicles or EVs would generate more than $1.2 trillion in health benefits and $1.7 trillion in additional climate benefits for the United States by 2050.

“The transportation sector is a leading contributor to air pollution and climate change,” said Ruth Canovi, director of advocacy for the American Lung Association in Connecticut, in a statement.

“Thankfully, the technologies and systems are in place to make these benefits a reality, especially in communities most impacted by harmful pollution today,” she noted. “We need our state leaders to act to implement equitable policies and invest in the transition to healthy air today.”

The group’s report – entitled “Zeroing in on Healthy Air” – builds off its “2020 Road to Clean Air” report and illustrates the potential scale of benefits to public health, air quality, and climate change if the United States accelerates a transition to “zero-emission transportation sector” coupled with a wholesale switch to “non-combustion and renewable” energy sources such as wind and solar.

The report finds that a national shift to 100 percent sales of zero-emission passenger vehicles by 2035 as well as medium- and heavy-duty trucks by 2040 – coupled with the aforementioned switch to renewable electricity – would generate over $1.2 trillion in public health benefits between 2020 and 2050.

Those benefits would take the form of avoiding up to 110,000 premature deaths, along with nearly three million asthma attacks and over 13 million workdays lost.

This report calculates the emission reductions possible from shifting to vehicles without tailpipes, as well as eliminating fuel combustion from the electricity generation sector so that neither those living near roads or near electricity generation would be subjected to unacceptable doses of toxic air pollution.

The report also highlights that the shift to zero-emission transportation and electricity generation in the United States would avoid global climate “damages” of over $1.7 trillion.

“By expediting investments and policies at the local, state, and federal levels to reduce harmful pollution, all [U.S.] communities stand to experience cleaner air,” the American Lung Association said in its report.

“Policies and investments must prioritize low-income communities and communities of color that bear a disproportionate pollution burden,” the group noted. “State and local jurisdictions should act to implement policies as soon as possible, including in advance of the benchmarks used in this report’s methodology. These actions are needed to achieve clean air, reduce health disparities and avoid even more dire consequences of climate change.”

State departments of transportation across the country are already making moves to help build out a national recharging network to support more widespread adoption of EVs.

Jim Tymon, AASHTO’s executive director, explained in a statement that the MOU provides a “framework for collaboration” in response to the $5 billion National Electric Vehicle Infrastructure Formula Program established by USDOT and DOE on February 10 to build and operate a nationwide network of EV charging stations.

Funding for that new program comes from the $1.2 trillion Infrastructure Investment and Jobs Act or IIJA signed into law in November 2021.