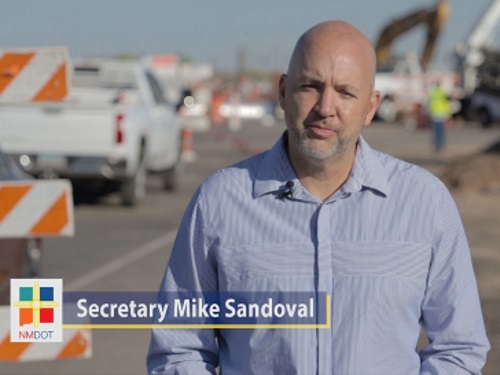 Michael Sandoval (seen above), secretary of the New Mexico Department of Transportation since 2019, retired effective May 1 after serving 27 years in state government.

[Above image via the New Mexico DOT]

During Sandoval’s tenure over the last three and half years, New Mexico DOT implemented more than $3 billion in construction programs. Before his appointment as cabinet secretary, he served as executive manager of the department’s modal divisions, in which he oversaw hundreds of contracts, the state’s 12 ports of entry, and major transportation projects including the Rail Runner, commercial vehicle permitting, and traffic safety.

A dedicated member of the New Mexico DOT team for over a decade, he also served as the director of the department’s Office of Safety Programs, Planning Division, and Traffic Safety Division.

“I am deeply grateful to Mike for his many years of leadership at the Department of Transportation and his professional career in state government,” said Gov. Lujan Grisham in a statement.

“Mike is truly beloved throughout all of state government – he has worked tirelessly over several decades to advance critically important projects improving the quality of life for New Mexicans and supporting state employees,” she added.

“I know he will be missed by his team at New Mexico DOT, legislators, and myself, but I wish him all the best in retirement and his next chapter with his family,” the governor said.

“My decision to retire did not come easily,” Sandoval noted. “I love my job and I am proud of the accomplishments and time I spent being of service to New Mexicans. When I think back on the last 27 years, it is the partnerships and relationships I made with employees, legislators, the public and private sectors, I am most proud of.”