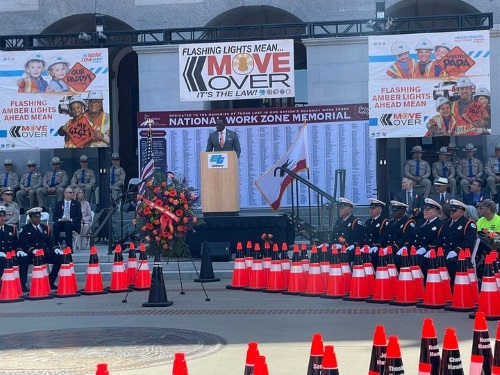 Over the past two weeks, state departments of transportation in different parts of the country held memorial ceremonies to honor workers who died in the line of duty.

The California Department of Transportation held its 32nd Annual Workers Memorial on April 28 to remember and honor the 189 public servants who have died since 1921 while building and maintaining that state’s transportation system.

During the ceremony, Caltrans placed 189 orange traffic cones in a diamond “caution sign” configuration, each bearing the name of an employee lost since 1921.

A black cone in the center represented all people killed while working on the state highway system, including private contractors, tow truck drivers, California Highway Patrol officers and other emergency responders. The commemoration also included the Caltrans Honor Guard, who led the symbolic tribute.

“Safety is always Caltrans’ top priority and the tragedies that brought us here today have resulted in intensified safety efforts within the department,” noted Steven Keck, acting director of Caltrans, in a statement.

“Zero deaths on our state highway system is the only acceptable number, and – as we recognize those who tragically died while at work on our transportation system – we remind all motorists to please ‘Slow for the Cone Zone,’ ‘Be Work Zone Alert,’ and ‘Move Over’ when you see flashing amber lights,” he added.

Keck noted that this particular ceremony marked the third year in a row that California added no new names to its fallen workers memorial — the longest stretch in nearly 75 years.

The Minnesota Department of Transportation also honored the men and women killed or injured while working on state roadways during its Worker Memorial Day ceremony on April 28. Since 1960, 35 Minnesota DOT workers and 16 contractors have lost their lives while working on the state’s highways.

“Every day, road workers across the state put themselves on the line to keep Minnesota’s roads safe for everyone,” said Nancy Daubenberger, Minnesota DOT’s interim commissioner, in a statement.

“Those workers – and everyone traveling through work zones – deserve to get home safely,” she noted. “Please, slow down and avoid distractions in work zones to help keep our workers – and yourself – safe.”

The South Carolina Department of Transportation also held a ceremony on April 28 to honor the agency employees killed on the job – a list dating back to the 1920s.

During this year’s memorial service, SCDOT added Charles “Chuck” Kennedy – who died in the line of duty on June 10, 2021, while on the way to a work site – to the agency’s fallen worker memorial wall, located at its headquarters.

The Colorado Department of Transportation held its annual Remembrance Day ceremony on April 13 to pay homage to the 62 employees who have died in the line of duty since 1929.

“With the highway construction season set to move into high gear, this is our opportunity to remember our fallen workers and highlight the need for safe driving throughout the state, not just in work zones, but along all of our roadways,” explained Shoshana Lew, Colorado DOT’s executive director, in a statement.

“People often forget that the men and women working in cone zones are part of someone’s family and they should drive through them as if that worker was a member of your family or a friend,” she said.

Colorado DOT pays tribute to fallen colleagues by having their name etched into the marble memorial outside the agency’s Denver headquarters building.