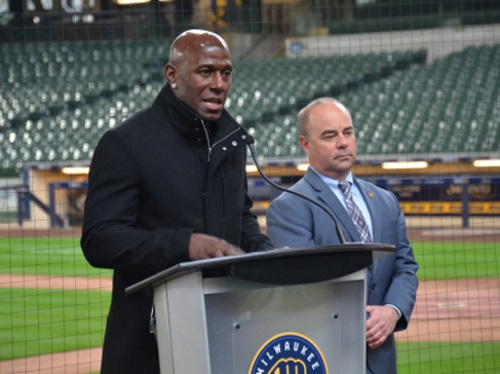 The Wisconsin Department of Transportation has once again drafted former Green Bay Packer Wide Receiver Donald Driver (seen above at podium) to play a role in its annual “Click It or Ticket” seat belt safety campaign.

The yearly “Click It or Ticket” campaign is a nationwide law enforcement effort that runs from May 23 through June 5. Law enforcement agencies across Wisconsin will be out on patrol to raise public awareness and encourage seat belt use, the Wisconsin DOT said.

At a kick-off event held in Milwaukee on May 3, Wisconsin DOT Secretary Craig Thompson noted that seat belt use has dropped statewide in recent years. In 2021, about 88 percent of drivers and passengers buckled up, according to a yearly agency seat belt survey – down two percentage points from 2019 and lagging behind the national seat belt usage rate of about 90 percent.

“We can put an end to those horrific crashes we see every day on Wisconsin’s highways. We need every person across the state to take responsibility for highway safety,” Thompson said in a statement. “Buckle your seat belt and put your phone down. Every trip, every time. It’s that simple.”

As Wisconsin DOT’s “Click It or Ticket” spokesperson, Driver also stars in a new animated video that is part of a public awareness campaign.

“The unfortunate reality is that buckling up is not a habit for many people,” Driver said during the Milwaukee kick-off event.

“When I buckle up, I buckle up for my family,” he noted. “I want to come home to them and I want each of them to make a habit of wearing a seat belt every time they get behind the wheel or ride in a car.”

Before a seat belt law took effect in 2009, Wisconsin’s seat belt use rate was under 74 percent. That number increased significantly thanks to ongoing public education, including advertisements featuring Driver alongside ongoing enforcement efforts.