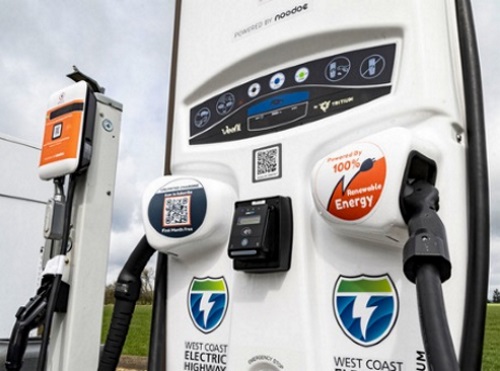 The Oregon Department of Transportation is committing $100 million over the next five years to build out Oregon’s public electric vehicle charging network on several major road corridors, as well as in local communities statewide.

The Oregon Transportation Commission approved that funding amount – which comes from a mix of federal and state sources – at its March 30 meeting.

The Oregon DOT said about two-thirds of the funding — $52 million from the 2021 Infrastructure Investment and Jobs Act plus a required 20 percent match — must be spent on EV charging infrastructure along “Alternative Fuel Corridors,” as per guidance from the Federal Highway Administration.

Alternative Fuel Corridors are roads approved by the FHWA on which states may use federal funding to build alternative fuel infrastructure. Electricity is an alternative fuel, and Oregon has seven corridors approved for federally funded EV charging: Interstates 5, 84, 82, and U.S. 26, 101, 20 and 97.

The remaining third of the money — $36 million — will be used to close EV infrastructure gaps beyond those seven corridors. More charging sites in rural and urban areas, underserved communities, and at apartment complexes will allow more Oregonians to charge where they live, work, and play, noted Amanda Pietz, administrator for Oregon DOT’s policy, data & analysis division, in a statement.

“We know that range anxiety is a big factor in people’s reluctance to make the switch to electric vehicles, especially in more rural parts of the state,” said Pietz. “This investment will build Oregonians’ confidence that an EV can fit into their life and get them where they need to go.”

She noted this $100 million investment focuses on building out charging infrastructure for light-duty EVs like cars, sport utility vehicles, and trucks because “demand is high and the technology is mature.”

“Money doesn’t surmount all barriers,” said Pietz. “Regulations and policies that benefit electrification play a role, too, and we rely on our partner agencies for help there. Couple that with our other work and investments in walking and rolling, bicycling, and congestion pricing, and we can move the needle on transportation emissions in a big way.”