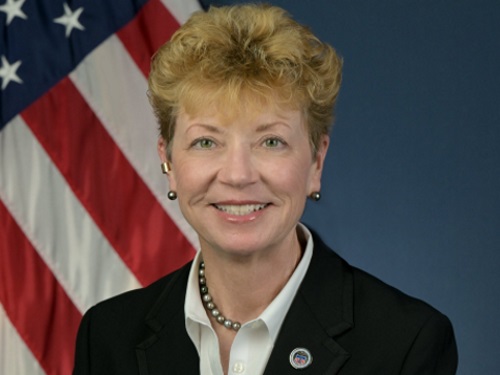 Following confirmation by the U.S. Senate on May 10, the U.S. Department of Transportation officially swore in Rear Admiral Ann Phillips (seen above), U.S. Navy, Ret., as the 20th administrator of the Maritime Administration. She is the first woman to lead MARAD as administrator.

[Above photo via the USDOT]

“From her distinguished naval service to her leadership on coastal infrastructure, Rear Admiral Ann Phillips has championed America’s maritime sector throughout her career,” said Pete Buttigieg, USDOT secretary, in a statement.

“Her experience and expertise will be invaluable as we address supply chain bottlenecks, implement the maritime investments, ensure the safety and success of midshipmen at the Merchant Marine Academy, and combat climate change in the maritime sector,” he added.

As head of the MARAD, Phillips will advise the USDOT secretary on commercial maritime matters, to include the movement of goods and the supply chain, as well as the U.S. maritime industry, environment and compliance, ports and waterways infrastructure, and strategic sealift. She will engage public and private stakeholders in the maritime industry and oversee the U.S Merchant Marine Academy.

Prior to her appointment to the Office of the Governor, she served nearly 31 years on active duty and has extensive experience operating with multi-national maritime forces, including NATO and Partnership for Peace nations, and serving overseas in Guam and Lisbon, Portugal.

Phillips graduated from the University of North Carolina at Chapel Hill and earned a Master of Business Administration from the College of William & Mary – Raymond A. Mason School of Business.