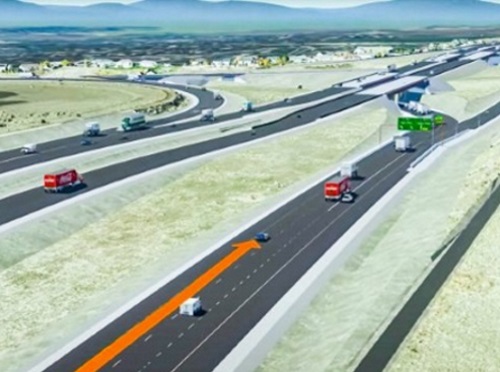 The Idaho Transportation Department (ITD) recently accepted a $111.9 million bid to rebuild the I-86/I-15 system interchange at Pocatello, with work scheduled to begin mid-July and continually for approximately three years as the interchange undergoes modernization.

The current interchange – originally built in the mid-1960s – needs an overhaul, with several obsolete bridges requiring replacement. In addition, traffic has increased significantly to the north of I-86 and east of I-15, resulting in more congestion and creating safety concerns.

Currently, a particularly challenging spot for drivers travelling west toward Chubbuck from the Pocatello Creek onramp, explained ITD District Engineer Todd Hubbard in a statement. “Drivers have just 2,400 feet to move from the right lane to the far left lane to exit to I-86,” he said in a statement. “This results in difficult maneuvers.”

To eliminate this problem the new design will allow through traffic travelling north toward Idaho Falls to remain in a left lane. Motorists entering the freeway northbound from Pocatello Creek can continue north to merge with northbound traffic or they can merge with westbound traffic passing under a bridge to head toward Chubbuck.

The new interchange design also converts Chubbuck Road into an underpass with sidewalk and bicycle lanes. Additionally, plans are in place to build a north-south bicycle and pedestrian pathway to help facilitate linking Pocatello Creek Road with the Portneuf Wellness Complex.

That initiative provides “hundreds of millions” in new transportation funding to help clear out one-third of Idaho’s bridge maintenance backlog and also allows ITD to accelerate project timelines to address rapid growth and build critical infrastructure that would otherwise take many years to fund and build.