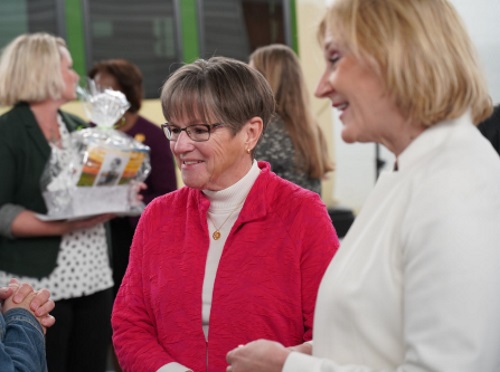 [Above photo via the Kansas Governor’s Office]

Launched in 2020, the Broadband Acceleration Grant is a 10-year $85 million program funded via the Kansas Department of Transportation’s Eisenhower Legacy Transportation or IKE program. This broadband expansion program – administered by the Kansas Office of Broadband Development – has awarded $70 million in grants since 2020.

“We’re continuing to deliver on our bold and ambitious goal to make Kansas a top 10 state for broadband access by 2030,” Gov. Kelly said in a statement. “Affordable broadband is necessary for our communities to remain viable and competitive, and every Kansan deserves a reliable connection to the world. These grants accelerate our efforts to make that a reality.”

“Broadband infrastructure is as critical to the well-being of Kansans as are safe roads, bridges, and drinking water,” added Julie Lorenz, secretary of the Kansas DOT. “These IKE-funded grants, when combined with [federal] broadband funding opportunities enable Kansas to strategically and efficiently expand quality broadband infrastructure throughout our state.”

These recent state-level broadband investments in Kansas come on the heels of a new national program launched by U.S. Department of Commerce on May 13 called the “Internet for All” initiative, which seeks to invest $45 billion to provide affordable, reliable, high-speed internet across America by the end of the decade.

Administered and implemented by the Commerce Department’s National Telecommunications and Information Administration, the initiative’s funds come from the $1.2 trillion Infrastructure Investment and Jobs Act or IIJA, enacted in November 2021.

The “Internet for All” initiative funds three separate programs with IIJA funding:

To participate in the BEAD Program, states and other eligible entities must submit a letter of intent and a planning funds budget, which will unlock $5 million in planning funds and allow states to begin creating their five-year action plan.

Each state will have direct support from dedicated NTIA staff through every step of the process and a guaranteed minimum allocation of $100 million, with additional funding determinations made based on the forthcoming coverage maps from the Federal Communications Commission.