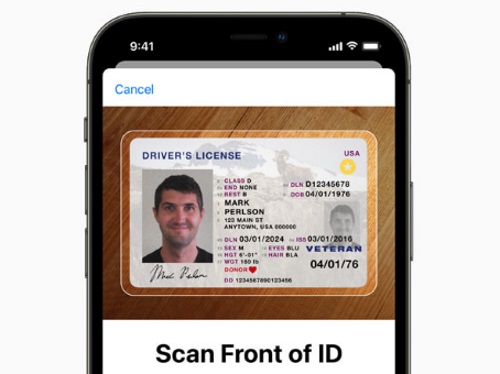 The Maryland Motor Vehicle Administration – a division of the Maryland Department of Transportation – has launched Maryland Mobile ID in Apple Wallet, providing state residents with a digital version of their state-issued driver’s license or state identification card.

[Above photo by Apple]

The agency said this new offering allows state residents to choose whether to add their driver’s license or state ID card to Apple Wallet; allowing them to “seamlessly and securely” present it via an iPhone or Apple Watch at select Transportation Security Administration airport security checkpoints, within Baltimore/Washington International Thurgood Marshall Airport and Ronald Reagan Washington National Airport.

Maryland is the second state to implement IDs in Apple Wallet – a move that follows a digital driver’s license pilot conducted by the MVA in 2017. It is one of eight states currently working with Apple to digitize identification for travelers at airports. Arizona became the first state to offer this service in April.

“Maryland is proud to be a leader once again in safe innovation with the implementation of Maryland Mobile ID in Apple Wallet,” noted Governor Larry Hogan (R) in a statement. “As we look to the future, we are committed to enhancing convenience and accessibility while maintaining the highest safety and security standards for our state and citizens.”

“Maryland Mobile ID in Apple Wallet offers additional security and privacy benefits than the physical state ID or driver’s license because Marylanders get to review the personal information they share with others, and use biometric authentication with Face ID or Touch ID to authorize it,” stressed MVA Administrator Chrissy Nizer.

“Over time, we expect the locations accepting mobile ID to grow, but we are excited to partner with the TSA to allow Maryland residents to present their Maryland Mobile ID in Apple Wallet at participating airports,” she added.