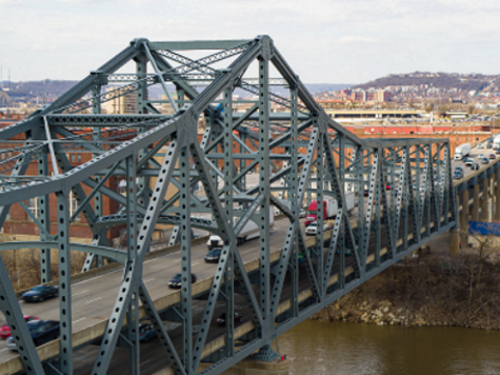 Kentucky Governor Andy Beshear (D) and Ohio Governor Mike DeWine (R) jointly submitted an application on May 24 requesting nearly $2 billion in federal funding to make much-needed improvements to the Brent Spence Bridge Corridor that runs through Northern Kentucky and the City of Cincinnati.

Both governors originally announced their intent to request grant funding from the U.S. Department of Transportation in February. They seek $1.66 billion in federal grant funding through USDOT’s Multimodal Projects Discretionary Grant.

The grant request represents approximately 60 percent of the remaining $2.77 billion project cost. Each state will also allocate significant state and other federal dollars toward the project. The states will split the cost of the new bridge 50/50, and each state will be responsible for the needed work on its side of the border.

“Ohio and Kentucky are working together to seize this once-in-a-generation opportunity to improve the quality of life for the millions of Americans who use the federal highway system to travel between our two states,” said Gov. Beshear in a statement. “The time is now to invest in transformative infrastructure that supports our growing workforce and safe travel along one of the nation’s most important commerce corridors.”

“The Brent Spence Bridge Corridor is a vital centerpiece to the interstate system of the United States, and we are optimistic that the federal government will recognize the importance of this project for both our national economy and national security,” added Gov. DeWine.

“With the current supply chain crisis in our country, the issue of ensuring that this major transportation corridor stays open and moving has never been more urgent,” he said.

Concurrently, the Kentucky Transportation Cabinet and the Ohio Department of Transportation are proceeding with engineering work for this project, with both agencies also continuing joint work to acquire the property needed to construct the project and will begin meeting with companies interested in working on this historic bridge project.

The Brent Spence Bridge Corridor project includes improvements to approximately eight miles of highway and the addition of a companion bridge on the west side of the existing Brent Spence Bridge, which the KYTC repaired after the structure suffered major damage due to a truck fire in November 2020.

That additional capacity will alleviate congestion, improve safety, and open up this nationally significant freight corridor, which carries an estimated 3 percent of the nation’s gross domestic product annually. Current plans also call for the separation of local and interstate traffic, which will improve access to local businesses and communities in Covington and Cincinnati.

That work seeks to identify ways to deliver the project at the lowest possible cost without sacrificing safety, quality, or environmental attributes, he said.

“These next key steps move us ever closer to unlocking the real potential of the I-71/75 corridor for this region, our two states, and our country,” Marchbanks noted.

[Editor’s note: Marchbanks recently received a State Government Alumni Award from Ohio University for “significant achievement” in his profession as well as for “outstanding public service.”]

KYTC Secretary Jim Gray added that the Brent Spence Bridge, which links Interstates 71 and 75 over the Ohio River, is currently accommodating more than 160,000 vehicles per day – over twice its designed capacity back when it opened in 1963.

“Our team has been busy working with our counterparts in Ohio to ensure we are ready to move forward once funds are awarded,” he said. “We have already taken many of the important steps necessary for a project of this size and scope that start long before the first shovel is placed.”