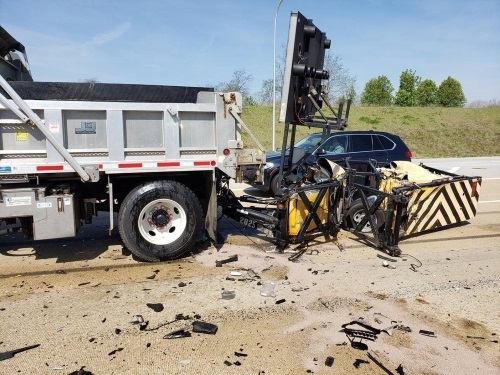 A yearly survey conducted by the Associated General Contractors of America and software firm HCSS found that 64 percent of highway contractors said motor vehicles crashed into their construction work zones during the past year.

According to the survey, motorists are in even greater danger from work zone crashes versus construction workers. While 18 percent of the highway contractors participating in the survey experienced crashes that resulted in injury to their workers, more than twice as many firms – 41 percent – reported experiencing a crash in which vehicle drivers or passengers were injured.

“The men and women of the construction industry are frequently working just a few feet, and sometimes inches, away from speeding vehicles,” said Ken Simonson, AGC’s chief economist and author of the annual survey, in a statement.

[Editor’s note: AGC released a video in conjunction with its work zone crash report this year highlighting the story of 25-year-old Marshall Walton, killed by a distracted driver in Alabama while managing traffic controls at a work zone in 2015.]

“Drivers who are too often distracted, speeding and/or under-the-influence crash into those work zones, putting workers and themselves at risk of serious harm and death,” he added.

Simonson noted that 97 percent of contractors report that highway work zones are either as dangerous, or more dangerous, than they were a year ago. He said that figure is consistent with data released by the National Highway Traffic Safety Administration that reported motor vehicle fatalities rose to a 16-year high in 2021, according to preliminary data.

“In many cases, vehicle speeding contributes to these crashes in work zones,” added Steve McGough, president and CEO of HCSS. “Utilizing speed cameras with a zero-tolerance policy would go a long way to protect the traveling public and our workforce.”

AGC and HCSS based this report on a nationwide survey of highway construction firms conducted this April and May, with over 500 contractors participating in this annual poll.

In a related effort, state departments of transportation supported the 2022 National Work Zone Awareness Week or NWZAW safety campaign, held from April 11 through April 15, in a variety of ways.

Julius Codjoe, special studies research administrator at Louisiana Department of Transportation and Development, noted in a special Transportation Research Board report that motorists unexpectedly coming upon slow or stopped traffic is the “usual cause” behind most work zone crashes.

“We know the more unexpected traffic queues you have, the more safety issues that are going to come up,” he said.

USDOT Opens Up $1B Pool of BUILD Grants