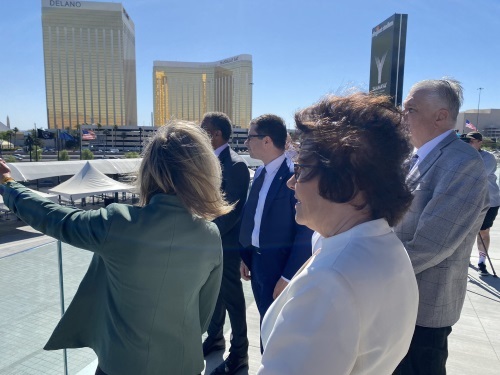 The Nevada Department of Transportation hosted a special “kickoff event” for the $305 million I-15/Tropicana Interchange construction project on May 31 at Allegiant Stadium in Las Vegas – a project expected to finish up in 2024.

[Above photo by Nevada DOT]

Kristina Swallow, director of the Nevada DOT, spoke at the event, as did Governor Steve Sisolak (D) and U.S. Transportation Secretary Pete Buttigieg, among others.

“It’s critically important, which is why we are making the changes we are doing,” Swallow said during the occasion, noting that the nearly 60-year Tropicana Bridge needs replacing due to its age and capacity constraints.

“It’s congested not just underneath the bridge but on Tropicana [Boulevard] itself, and we have safety considerations and concerns,” she added.

The I-15 Tropicana Interchange is a joint project sponsored by the Nevada DOT and the Regional Transportation Commission of Southern Nevada. The Federal Highway Administration and Clark County Public Works are also key partners in the process.

The project includes replacing the existing interchange structures to widen and lengthen the Tropicana Avenue Bridge over I-15. Other improvements include the replacement of an existing flyover, addition of High Occupancy Vehicle or HOV ramps, and the separation of through traffic on Dean Martin Drive from the Tropicana Avenue intersection.

“This is a very important day for Nevada, especially southern Nevada,” Gov. Sisolak noted. “This project has been decades in the making. It changes the access point for our residents and tourists. New resorts, professional sports, and sold-out concerts have drawn as many as 300,000 visitors on peak weekends. The I-15/Tropicana Interchange serves as a gateway to the Las Vegas Strip, which continues to grow as the Entertainment and Sports Capital of the World.”

Sec. Buttigieg stressed that projects like the I-15/Tropicana Interchange are not just about “building highways and stadiums” but improving mobility and safety for tourists and residents but helping boost economic growth as well.

“This is a place experiencing such extraordinary growth in jobs, population, and economic activity and that brings a lot of challenges,” he said. “This terrific project will dramatically improve people’s travel into and out of the Las Vegas strip. It will replace the old bridge, improve access ramps, double the width of the sidewalks, and add advanced traffic safety measures known to reduce crashes.”