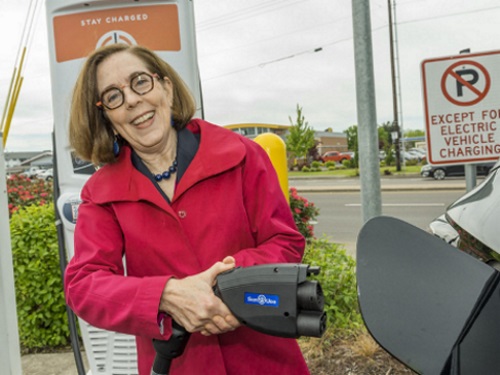 The governor hosted a media event at the Woodburn Transit Facility near I-5 along with Oregon DOT Director Kris Strickler and Ian Vishnevsky, COO/CFO of EVCS, the company that administers the charging stations on the West Coast Electric Highway.

Brown said public–private partnerships would be critical as the state moves quickly to address the effects of climate change.

The West Coast Electric Highway, a network of EV charging stations that stretch from British Columbia to southern California, has 44 stations in Oregon along Interstates 5 and 84, and U.S. 101.

Phase 1 upgrades to the network, which wrapped in May, outfitted Oregon’s stations with more types of EV chargers as well as upgrades to existing chargers in order to serve a wider range of electric vehicles, including electric-powered bicycles or “e-bikes.”

EVCS says Phase 2 of their upgrade plan – which begins this summer – will convert 11 stations to “superstations” that will have even faster charging speeds. Phase 3, which begins this fall, will add three brand-new stations, expanding the network to 47 total stations in Oregon.

Oregon DOT – which is contributing $4 million for the project, a mix of state and federal dollars – noted in a statement that its support of the West Coast Electric Highway upgrades is part of the agency’s $100 million commitment  to expand public EV charging infrastructure statewide over the next five years.

The agency plans to collaborate with private firms to place fast-charging stations every 50 miles along major interstates and highways, and bolster charging access for urban, rural, and underserved communities.

Down on the Gulf Coast, the Louisiana Department of Transportation and Development is seeking public and tribal input regarding its EV infrastructure deployment plan. Over the next five years, the agency expects to receive up to $73.1 million for EV infrastructure through the $1.2 trillion Infrastructure Investment and Jobs Act or IIJA, enacted in November 2021.

In order to receive the funds, state transportation agencies must submit an EV infrastructure deployment plan by August 1 – and Louisiana DOTD noted in a statement that it is working with Louisiana Clean Fuels, Inc. and Grant Management Group, LLC, on such a plan. As part of its public involvement process, the agency is requesting input from the general public and tribal governments via a survey available on its EV webpage.

Meanwhile, on the East Coast, the Connecticut Department of Transportation recently made available universal Level 3 “fast chargers” that can fully recharge an electric vehicle or EV in less than 30 minutes at the I-95 Southbound service plaza in Madison, CT.

Tesla-specific chargers are already in place at many Connecticut service plazas, operated by Project Service LLC, but these new Level 3 fast chargers are universal, meaning any EV can plug in and charge up.

Applegreen Electric, a private organization with over 500 fast EV charging bays across the globe, funded their installation, Connecticut DOT noted. They are available on a first come, first serve, and require a credit card for payment.

“These universal fast chargers make it easier for people to travel to and through Connecticut. With convenient access to I-95 and I-395, families and travelers can grab a coffee or snack, charge up, and get back on the road more quickly and enjoy their summer plans,” Connecticut DOT Commissioner Joe Giulietti explained in a statement.

“The future of transportation is green transportation, and by providing these chargers at our clean and convenient service plazas, we are making sure Connecticut is EV ready,” he said.

AASHTO also recently helped establish a free repository of information on electric vehicles available to state agencies. Called the “EV States Clearinghouse,” it contains a variety of documents such as sample requests for proposals or RFPs, sample contracts, EV infrastructure siting and assessment tools, plus other resources.